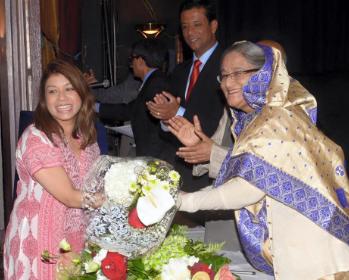 Prime Minister Sheikh Hasina has expressed her firm determination to speed up the country’s development by maintaining good relations and strengthening connectivity with the neighbours.
“Our aim is to further accelerate the country’s uplift by maintaining good ties and strengthening connectivity with the neighbours and improve the living standards of the people by utilizing Bangladesh’s geographical importance in South Asia,” she said.
In this connection, Sheikh Hasina said Bangladesh, China, India and Myanmar have undertaken a joint plan titled “BCIM Economic Corridor (BCIM-EC)” to ensure economic development of the region by increasing connectivity.
The Prime Minister said this while addressing a civic reception at the Park Lane Hotel here on Sunday evening.
The United Kingdom Awami League accorded the reception in honour of Prime Minister Sheikh Hasina for her outstanding achievements in different fields, particularly the implementation of the much-awaited Land Boundary Agreement (LBA) with India.
With UK Awami League President Sultan Mahmud Sharif in the chair, the function was addressed by PM’s ICT Advisor Sajeeb Wazed Joy, State Minister for Foreign Affairs Md Shahriar Alam and UK Awami League Joint Secretary Anwaruzzaman Chowdhury.
Noted journalist Abdul Gaffar Chowdhury read out a citation presented to the Prime Minister by expatriate Bangladeshis and the UK Awami League, while UK Awami League General Secretary Syed Sajedur Rahman Faruk conducted the function. 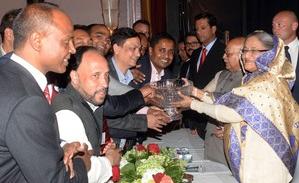 A number of British House of Commons members spoke briefly at the function after receiving a good number of copies of the book, “Unfinished Memoirs of Bangabandhu” from the Prime Minister.
They included Labour Party MP from Hampstead and Killbern and granddaughter of Father of the Nation Bangabandhu Sheikh Mujibur Rahman Tulip Rezwana Siddique, Labour Party MP from Cardiff Central Jo Stevens, Labour Party MP from Ilford North Wes Streeting, Labour Party MP from Ilford South Mike Gapes and Conservative Party MP from Sutton and Cheap Paul Scully.
Besides, Awami League Advisory Council Member Suranjit Sengupta, MP, Awami League lawmaker from Jhenidah Nabi Newaz, PM’s Media Advisor Iqbal Sobhan Chowdhury, Press Secretary AKM Shameem Chowdhuri and Awami League leaders from different European countries were present on the occasion.
At the outset of the function, a minute’s silence was observed as a mark of respect to the memories of Bangabandhu and other martyrs of the August 15 carnage, four national leaders, the Liberation War martyrs and the martyrs of other democratic movements.
The Prime Minister said Bangladesh, India, Nepal and Bhutan have reached a consensus to increase connectivity among them for the sake of their development.
Terming poverty as the common enemy of the region, Sheikh Hasina said all countries will have to fight together against it. “It won’t be proper to think about only ourselves, we will also have to think about our neighbours,” she said.
Describing the implementation of the Land Boundary Agreement (LBA) with India as a huge diplomatic and political success of the present government, the Prime Minister said whenever Awami League government assumed office; it solved problems one after another.
Sheikh Hasina said her government has solved the maritime dispute with Myanmar and India by lodging cases with international arbitration court through maintaining friendly relations with them.
“We have solved problems with the neighbours through discussions and it is Awami League which could bring honour for the Bangalee nation politically and diplomatically,” she said.
Highlighting the background of execution of the LBA, the Prime Minister said Father of the Nation Bangabandhu Sheikh Mujibur Rahman had taken initiative to solve the problems of the enclave people.
Bangabandhu, she said, signed the historic LBA with the then Indian prime minister Indira Gandhi on May 16 in 1974 in New Delhi to solve the decades-old problems of the enclave people. 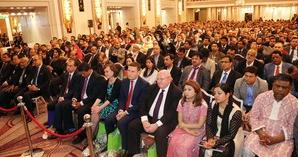 The Prime Minister said Bangladesh parliament ratified the LBA through the third amendment to the constitution on November 28 in 1974. “But after the assassination of Bangabandhu, no subsequent government took any effective initiative to implement the LBA,” she said.
Sheikh Hasina said the sufferings of the enclave people would have been removed and Indian parliament would have ratified the LBA much earlier had Bangabandhu not been assassinated in 1975.
She said the subsequent governments of Zia, Ershad, Khaleda Zia and caretaker government did not have the courage to solve the problem.
The Prime Minister said her government has inked the Ganges Water Agreement with India and resolved the decades-old Chittagong Hill Tracts problem.
Spelling out her government’s stunning success in different fields including agriculture, education, health, economy, electricity and ICT, she said poverty rate has been cut to 22.7 percent, while extreme poverty rate has been reduced to seven percent.
“Official announcement to this end would be made soon,” she said.
Sheikh Hasina said five crore people have been upgraded to the middle class from the lower class in the last six years due to various steps of the government. “We are setting up 20 special economic zones in the country to ensure rapid development and generate employment,” she said.
Sheik Hasina said food security has been ensured and the country’s food production reached to 3 crore 83 lakh 47 thousand metric tons. In this context, she said her government instantly sent 10,000 metric tons of rice to earthquake-hit Nepal and made an arrangement to send one lakh metric tons to the country.
The foreign currency reserves rose to 24 billion dollars, she said, adding that she got encouragement for the construction of country’s mega bridge over the Padma river with own funds from the expatriate Bangladeshis who always assured her of allout support to this end.
The Prime Minister said she has no nothing to get for her own and her only aim is to ensure welfare and development of the countrymen.
She said since her return home from exile in 1981, she is working for the welfare of the country being encouraged with the love of the countrymen and cooperation of the expatriate Bangladeshis. The Prime Minister said Bangladesh is moving forward and there would many obstructions in this journey. “But we will have to advance by removing those hurdles,” she said.
Sheikh Hasina said: “It’s our innate ability throughout our life to row the boat forward against the tide and we are moving ahead by taking the boat forward against the tide.”
The Prime Minister said: “Bangladesh is a country of natural disasters and we will have to move by facing storms and cyclones,” she said.
She said there are natural calamities on the one hand and manmade disasters on the other hand. “We have to face the both,” she said.
Referring to killing, burning and vandalism unleashed by the BNP-Jamaat clique, Sheikh Hasina said the mastermind of these barbaric acts is now living in London.
The Prime Minister said those embezzled the money of the orphans and those who killed people, including innocent children and women, by torching buses won’t be spared.
“The perpetrators and instigators of these heinous crimes must be tried,” she asserted. -BSS