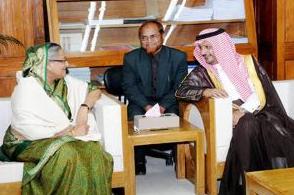 Prime Minister Sheikh Hasina yesterday urged the Saudi government to recruit more manpower from Bangladesh for mutual benefits of the two brotherly countries.
The Prime Minister made the request when outgoing Saudi Ambassador to Bangladesh Dr Abdullah Bin Naser Al-Busairi paid a courtesy call on her at her Jatiya Sangsad Office here yesterday evening.
After the meeting, Prime Minister’s Press Secretary AKM Shameem Chowdhuri briefed reporters.
Sheikh Hasina thanked the Saudi government for hosting a huge number of expatriate Bangladeshis.
In reply, the outgoing Saudi ambassador said Bangladeshi workers are well-mannered and hardworking and they are now safe in Saudi Arabia.
At the meeting, the Prime Minister hoped that both Bangladesh and Saudi Arabia would continue working together for peace, progress and prosperity for the two nations as well as welfare of the Muslim Ummah.
Sheikh Hasina requested the envoy to convey her compliments to King Abdullah bin Abdul Aziz Al Saud, the custodian of the two holy mosques–Masjid-al-Haram and Masjid-e-Nababi.
The Premier thanked Dr Al-Busairi for his successful completion of nearly six and a half years’ tenure in Bangladesh, saying the relations between the two brotherly countries were strengthened further during the period.
The outgoing Saudi ambassador hoped that the existing brotherly ties between the two countries would be further consolidated in the days to come.
He thanked the Bangladesh government, especially Prime Minister Sheikh Hasina, for extending allout cooperation in discharging his responsibilities in Bangladesh. -BSS