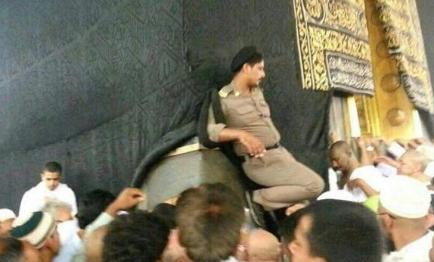 Makkah Gov. Prince Mishaal bin Abdullah has expressed his indignation over a policeman putting his leg on the Holy Kaaba while controlling the crowd at the House of God’s black stone corner recently.
The governor urged Makkah region’s police chief Maj. Gen. Abdul Aziz Al-Souli to investigate the incident and take strict administrative action against the officer for his actions.
The image of the man putting his leg just above the stone went viral on social media sites.
Prince Mishaal instructed the police chief to hold special awareness programs for security, military and civilian officers working at the two holy mosques to respect the sacredness of these vicinities and to deal with pilgrims and visitors decently.
Saudi bloggers have condemned the policeman’s action and said such people who do not respect the place’s sanctity should not be appointed to maintain law and order at holy sites.
One blogger, who is studying in the UK on the King Abdullah Foreign Scholarship Program, urged Saudi security officers to learn from British royal guards who stand for hours like idols.
“We should have a special force for the two holy mosques, who will be physically fit and wear military dress especially designed to suit the holy place,” he said.
He also pointed out that these officers should be given special training to deal with worshippers and visitors politely.
“We are talking about the holiest place in the world and not Buckingham Palace,” he added.