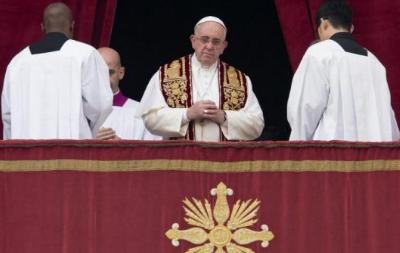 Pope Francis is focusing his attention on all those weeping in the world this Christmas, singling out the refugees, hostages and all those suffering in conflicts in the Middle East, Africa and Ukraine.
On a day that brings joy to little ones in much of the world, Francis expressed anguish for children who are victims of violence, including the recent terrorist attack on a Pakistani military school, or those who are trafficked or forced to be soldiers.
Tens of thousands of Romans and tourists in St. Peter’s Square listened Thursday as the pontiff delivered the Catholic church’s traditional “Urbi et Orbi” (Latin for “to the city and to the world“) Christmas message from the central balcony of St. Peter’s Basilica.
Francis said: “truly there are so many tears this Christmas.”