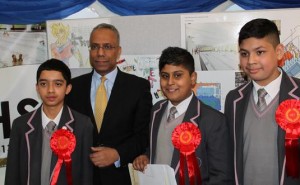 The Mayor of Tower Hamlets attended a special ceremony held on the forecourt of Poplar Baths to celebrate the achievements of young designers who won a competition to have their vision incorporated into the development’s hoardings.
Guildmore, the contractors leading the redevelopment, awarded each of the winning designers from Cayley Primary School and St Paul’s Way Trust School with a goody bag containing a £200 gift certificate and an Apple iPad. The winners also had their artwork scaled up against the hoardings in East India Dock Road.
On receiving his prize, Abu Saeed, 12, from St Paul’s Way Trust School, explained how his design fused his childhood imagination with the potential the building will bring.
Abu said: “I really enjoyed drawing this piece and I can’t believe I won! It will be very exciting to see how the building looks once it’s opened.”
Mayor of Tower Hamlets, Lutfur Rahman, said: “Today’s celebration is a result of the consistent hard work of individuals who have rightfully pushed for the Poplar Baths to reopen. The project will see the conservation and restoration of this iconic grade II listed building, in addition to bringing an affordable leisure facility to our community.”
Earlier this year Tower Hamlets Council entered into a conditional development agreement with Guildmore for the redevelopment of Poplar Baths which was closed to the public in 1992.
The £36 million investment will also see 100 housing units developed alongside a new youth centre on Ben Jonson Road.
Cabinet member for Housing, Cllr Rabina Khan, said: “The development will bring a top class leisure centre, youth centre and much-needed homes to our community.”
Work is scheduled to begin early next year, with the project aimed to be completed by the end of 2015.