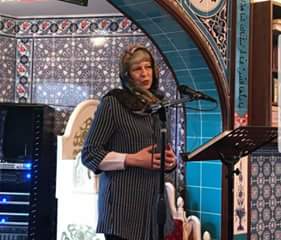 UK Prime Minister wore veil while participating in ‘Visit My Mosque’ weekend PM Theresa May visited Maidenhead mosque south-east of London on Sunday, as part of an initiative to encourage British to visit Mosques and learn about Islam and its message calling for peace in the world.
May who covered her hair with a scarf said that it was “a very precious occasion to be able to learn about Islam and to stress that it is a peaceful religion.”
The doors of more than 200 British mosques were opened Sunday as part of an initiative that started after the attacks of 7/7, 2005 on the transport network in London to encourage dialogue between the different faiths in the UK.
Senior UK officials participated in the initiative organized by the Muslim Council of Britain to encourage tolerance in society. The muslim council explained that “Visit My Mosque” day is important for society as “open doors, open mosques (mean) open societies.”