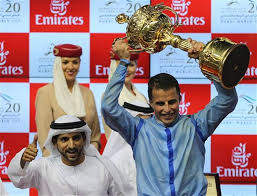 Prince Bishop pulled away from race favorite California Chrome on the home straight to win the $10 million Dubai World Cup by two and three-quarter lengths on Saturday.
Starting from the rail, William Buick rode Prince Bishop to the horse’s first victory on dirt, at his fourth attempt at the world’s richest horse race.
Buick said he felt numb.
“I can’t express what I am feeling right now,” he said. “It’s very surreal. We were detached last, but ended up traveling very well in the last turn. I didn’t look back, but I imagine we won well because I could hear the commentator. I feel a bit numb at the moment, but I’m sure when I get home and relax it will sink in.”
The 8-year-old Prince Bishop was bred in Ireland, but has been trained by Saeed bin Suroor in the Emirates. He beat the Art Sherman-trained favorite on Meydan Racecourse’s new dirt track.
In third place came another American, Lea, who was saddled by William Mott, the UStrainer who led Cigar to victory at the inaugural Dubai World Cup in 1996.
California Chrome, the US horse of the year, has not won on dirt since the Preakness Stakes last year. The 4-year-old 2014 Kentucky Derby winner, ridden by Victor Espinoza, was running in second behind Hokko Tarumae going into the final leg, but could not keep pace when Prince Bishop attacked.
Earlier, Christophe Soumillon rode Dolniya to victory in the $6 million Dubai Sheema Classic, having earlier won the $2 million UAE Derby atop Mubtaahij, the 4-year-old Irish-bred colt.
Mubtaahji, trained by a South African and ridden by a Frenchman, is likely headed next to the Kentucky Derby in Louisville, Kentucky, on May 2, trainer Mike de Kock said.
“We’ll be there,” de Kock said.
Mubtaahij, sent off as the favorite in the field of 10, followed pace-setters Golden Barrows and Tap That before jockey Soumillon took off with his colt and blew away the competition with an eight-length victory.
The horse is owned by Sheikh Mohammed bin Khalifa Al Maktoum, nephew of Godolphin owner Sheikh Mohammed bin Rashid Al Maktoum.
Solow, sired by 1997 Dubai World Cup winner Singspiel, won the $6 million Dubai Turf by four-and-a-quarter lengths ahead of favorite The Grey Gatsby.
“This was a big test, as it was his first Group 1 race,” Solow trainer Freddy Head said. “I couldn’t have had him better, and he showed what a good horse he is. Maxime Guyon rode him perfectly, very quiet, very cool.”
Espinoza claimed a win for the United States atop Secret Circle in the $2 million Dubai Golden Shaheen, while Sole Power beat Peniaphobia to take the $1 million Al Quoz Sprint.
Brown Panther, owned by former Liverpool and Real Madrid footballer Michael Owen, comfortably won the Dubai Gold Cup, Tamarkuz took the $1 million Godolphin Mile, and Manark triumphed in the $6 million Dubai Kahayla Classic.