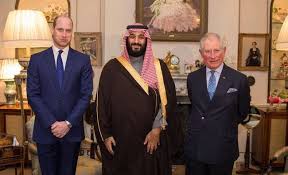 Saudi Arabia’s Crown Prince Mohammed bin Salman was received by Britain’s heir to the throne Prince Charles on Wednesday evening. The Prince of Wales held a dinner for the crown prince who had, earlier in the day, been welcomed by Queen Elizabeth at Buckingham Palace. Prince Mohammed is on a three-day visit to Britain.
He met British Prime minister Theresa May at Downing Street, where Saudi Arabia and the UK set out an ambition to build 65 billion pounds ($90.29 billion) of trade and investment ties in coming years.