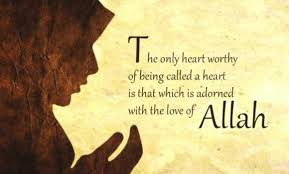 Harun Yahya: My heart is pure, so Allah will forgive me …” we often hear such words. This is a distorted logic, an excuse people make in order to suppress the voice of their conscience. It is an invalid excuse emanated from worldly desires. The way people suppress their consciences prevents most of them from genuinely turning to Allah and which keeps them from abiding by the moral values commanded by Him.
What does this “purity of heart” actually mean? According to Qur’anic moral values, ‘not doing any harm to anyone’ is not justification for ignoring responsibilities revealed to us by Allah?
A sound heart
While mentioning about people’s heart, Allah says: “But only he (will prosper) who brings to Allah a sound heart.” (Qur’an, 26:89)
The Islamic concept of a “sound heart” is not just the pureness of heart that some people understand it to be, for the Qur’an defines a sound heart as submitting fully to Allah.
People with sound hearts, in the Qur’anic sense, have faith in Allah, observe the limits and prohibitions that He has established, and submit to Him fully. There is no other form of a sound heart, for the Qur’an defines a person with a sound heart as someone who constantly brings Allah to mind and feels at peace with His remembrance. The following verse makes this quite clear: “Those who believe and whose hearts find peace in the remembrance of Allah. Only in the remembrance of Allah can the heart find peace.” (Qur’an, 13:28)
A very important characteristic of believers is sensitivity of the heart that enables them to derive pleasure from the Qur’an’s morality and to feel a great pleasure and peace in obeying Allah. Allah describes this sensitivity as ‘Allah’s guidance’: “Allah has sent down the Supreme Discourse, a Book consistent in its frequent repetitions. The skins of those who fear their Lord tremble at it, and then their skins and hearts yield softly to the remembrance of Allah. That is Allah’s guidance, by which He guides whoever He wills… (Qur’an, 39:23)
Consequently, a sound heart in the Islamic context means a heart that is purified from all forms of impurity that draws one away from Allah. Such people stay away from worldly greed, selfishness, fears, and insecurity. As a result, they do not become attached to any person or thing other than Allah or feel a type of love for them that is independent of Allah.
It is of course important and excellent for someone to be known in the community for “being good and having a pure heart.” However, basing oneself on the importance in society of “having a pure heart” and then saying, “I do no harm to anyone, and even help them on occasion, when necessary,” does not mean that one is fully living by the moral values of the Qur’an. In addition, thinking in that way is nothing more than self-deception. An act or an attitude that is accepted as a good deed by a society remote from the Qur’anic morality, although it is not based upon the Qur’an’s values, may not be worthy in Allah’s sight. The main criterion that renders a deed good and worthy in His sight is the degree of its conformity with Allah’s good pleasure. The following verses are quite explanatory: “Do you make the giving of water to the pilgrims and looking after the Masjid Al-Haram the same as having iman in Allah and the Last Day and doing jihad in the Way of Allah? They are not equal in the sight of Allah. Allah does not guide wrongdoing people.” (Qur’an, 9:19)
It is not devoutness to turn your faces to the East or to the West. Rather, those with true devoutness are those who believe in Allah and the Last Day, the Angels, the Book and the Prophets, and who, despite their love for it, give away their wealth to their relatives and to orphans and the very poor, and to travellers and beggars and to set slaves free, and who establish prayer and pay alms; those who honor their contracts when they make them, and are steadfast in poverty and illness and in battle. Those are the people who are true. They are the people who guard against evil. (Qur’an, 2:177)
Fear of Allah
People may be known as “good” by giving food to animals they see in the street or getting along well with their neighbors. And this is of course good behavior. But the way to avoid eternal suffering in Hell and the way to attain the approval and mercy of Allah lies not in being known as “a good person,” but in being a true believer in the manner described by Allah in the Qur’an.
Living by Qur’anic moral values bestow freedom from worldly values and all forms of dependence felt towards other people. A believer with such moral values seeks the approval of Allah, not that of other people. He fears Allah alone and knows that all things are under His control. Fear leads him to scrupulously adhere to the bounds set by Allah and silences all excuses proffered by worldly desires. The awed respect felt for Allah and the sincere efforts made to attain His approval are the basis of Qur’anic moral values. Almighty Allah has revealed this as follows: Who is better: Someone who founds his building on fear of Allah and His good pleasure, or someone who founds his building on the brink of a crumbling precipice so that it collapses with him into the Fire of Hell? Allah does not love wrongdoers. (Qur’an, 9:109)
—The writer has authored more than 300 books translated in 73 languages on politics, religion and science.