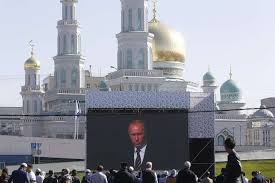 Russian President Vladimir Putin in Moscow on Wednesday opened one of the biggest mosques in Europe, warning against the lure of jihadists as the government frets over its citizens fighting for the Islamic State of Iraq and Syria (ISIS) group.
Turkish leader Recep Tayyip Erdogan and Palestinian president Mahmud Abbas were the guests of honor at the unveiling of the 20,000-square meter mosque in the Russian capital.
“This mosque will become an extremely important spiritual center for Muslims in Moscow and the whole Russia,” Putin said in a televised speech.
“It will be a source for education, spreading humanist ideas and the true values of Islam.”
Putin in his speech lashed out at jihadist groups for their “attempts to cynically exploit religious feeling for political ends.”
“We see what is happening in the Middle East where terrorists from the so-called ISIS group are compromising a great world religion, compromising Islam, in order to sow hate,” he said.
Putin was later set to meet Erdogan for talks that were expected to focus on the Syrian conflict, as the West frets about a buildup of Russian forces in the war-torn country.
The United States says Moscow has recently sent troops, tanks and fighter jets to Syria, sparking fears that Russia could be looking to join the fight alongside its ally President Bashar al-Assad.
Turkey and Russia stand on opposing sides over the crisis in Syria, with Ankara fiercely backing the rebels trying to oust Assad.
Turkey is currently waging what Ankara describes as a two-pronged “war on terror” against both ISIS and the Kurdistan Workers’ Party (PKK), although so far air strikes have overwhelmingly focused on bases of the Kurdish militants in northern Iraq.
Moscow has been on a diplomatic push to try to get Western and regional powers involved in a coalition against ISIS to join forces with Assad.