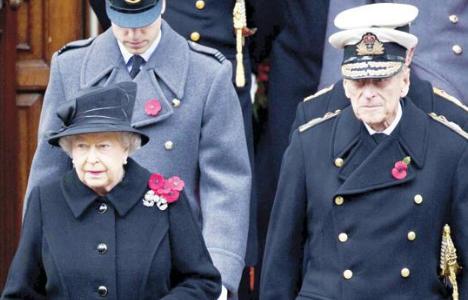 Queen Elizabeth II lead Britain in paying silent tribute to the Commonwealth war dead on Remembrance Sunday, an annual event made particularly poignant this year on the centenary of the start of World War I.
The 88-year-old monarch, senior royals and politicians including Prime Minister David Cameron laid wreaths at the Cenotaph national war memorial in London, as hundreds of veterans from more than 70 years of conflicts looked on.
Security was tighter than normal amid heightened fears of the risk of a terror attack, but there was no change to the customary program of marches and military music.
A 13-pounder World War I gun was fired at 1100 GMT, marking the start of two minute’s silence observed by millions of people across Britain and at British military bases across the world.
Remembrance Sunday is the Sunday closest to Armistice Day on Nov. 11, the anniversary of the 1918 signing of the peace that ended fighting in World War I.
More than one million people from the British Empire died in the four-year conflict, but the day has become a time to remember all the troops killed in wars since then.
It is thought there has been only one year — 1968 — without a British military fatality on active service since the end of World War II in 1945. Cameron said the ceremonies were “particularly poignant” as 2014 is the centenary of the start of World War I, as well as the 70th anniversary of the D-Day landings and the end of Britain’s combat role in Afghanistan.
“Today we stand united to remember the courageous men and women who have served our country, defended our freedoms and kept us safe,” he said ahead of the event.
“We remember all those who have fallen and those who have risked their lives to protect us.”