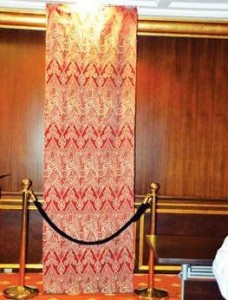 A rare piece of the Kiswa (the cover of Kaaba) dated 1354 A.H., which was given as a gift by the monarch of Al-Bohra to King Abdul Aziz, was sold for $1 million at the second auction of Arabian Wings in Jeddah.
The piece is considered to be one the rarest pieces of the Kiswa.
Arabian Wings is a well-known art group. The auction, which fetched SR4.7 million, also saw artworks from a number of Saudi and Arab artists. They included sculptures, paintings and Islamic and contemporary art.
Arabian Wings held the event in collaboration with the Fitaihi Group.
According to Mohammed Bahrawi, chairman and founder of the Arabian Wings, the first edition of the group’s auction was held in 2011.
“This year, it was all about contemporary art with different moods and tastes, and was an outstanding success for us,” said Bahrawi.
He said the new owner of the antique Kiswa cloth, who has requested anonymity, is very happy. He is planning to put it up in the next auction.
Bahrawi said having a piece of Kiswa is considered to be a symbol of pride and honor for Saudis.
“We must have a platform to display Islamic antiques in Jeddah,” he said. “The museum with Islamic treasures will be a great investment and a great opportunity for people to know about Islam and its importance.”