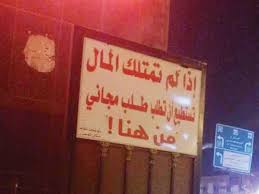 A seafood restaurant in the Saudi capital, Riyadh is offering free meals to anyone who cannot afford to pay for them.
A sign that reads “If you do not have the money to pay for it, you may place your order free of charge here” alerts people to the special offer, a report on the local news site Sabq said on Tuesday.
“The restaurant owner decided to make the free food offer after a fire broke out here, but thankfully without causing any damage,” the accountant said.
He added that the owner had instructed the staff to give free food to anyone who claimed they could not pay, without verifying their status or asking questions.
“Anyone who says he does not have money to pay for the food gets it for free,” the accountant said. “At times, we have young people who come to us, claim they do not have money and place their orders. We do serve them, of course. However, at the last moment, they insist on paying, explaining that they wanted to test us and to see whether the signpost was a commercial deception or trick,” the accountant said.
Some families often approach the restaurant to ask for free takeaway food and they get it free of charge, he added.
Social media users heaped praise on the restaurant owner and called for him to be rewarded for his charitable initiative and compassion. They said that his “shining example should be emulated by rich business owners.”