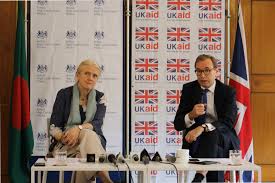 The United Kingdom will give an additional £87 million for sustaining the Rohingya operation in Cox’s Bazar, lifting their contribution to a total of 226 million pounds since the start of the Rohingya crisis in August 2017, UNB reports.

The additional funding, the UK says, will enable the government of Bangladesh and the international community to find longer-term solutions for the Rohingya people. Over £20 million is being made available to support development in Cox’s Bazar to mitigate the economic and environmental impact the Rohingya crisis is having on the local communities, it says.

It will also help provide food, healthcare, water, sanitation, care and counselling for sexual violence survivors, and protection for vulnerable groups. The UK said it is working to ensure that the international response benefits all the population in the district, according to British High Commission in Dhaka.

Bangladesh is currently hosting more than 1.1 million Rohingyas. Most of them fled here from their homeland in Myanmar’s Rakhine State after the military launched a brutal offensive targeting the mainly-Muslim ethnic minority.

International Development Secretary Alok Sharma in a statement said it is hard to truly grasp the size of the humanitarian crisis faced by the Rohingya people and mentioned that more than 700,000 were forced to flee their home in the face of horrific brutality.

He said the UK has worked with the government of Bangladesh to provide lifesaving aid, including food, water and shelter, as well education and counselling as they rebuild their lives.

Sharma said women and girls represent over half of the camp population in Bangladesh, and this new funding will provide vital support for them, such as critical reproductive health care, and a new emergency shelter for survivors of severe gender-based violence and trafficking.

“This support announced today demonstrates our continued commitment to the Rohingya people,” he said.

British High Commissioner Dickson said the UK and Bangladesh have a strong and enduring partnership, which continues to deepen as Bangladesh transitions to becoming a middle-income country.

“We greatly appreciate the remarkable generosity and humanity the government and the people of Bangladesh have shown in hosting the Rohingya people,” he said.

The High Commissioner said the overarching aim must remain finding a solution to this crisis so that the Rohingya can voluntarily return to Myanmar in safety and dignity.

“The UK remains committed to ensuring that conditions are put in place to allow this to happen,” said the British envoy.

Head of DFID Bangladesh Judith Herbertson said this additional £87 million will help deliver stability and security for the Rohingya and for vulnerable local communities in Cox’s Bazar who have been affected by the crisis.

“We appreciate the enormous generosity of the Government of Bangladesh and the people of Cox’s Bazar. And we pay tribute to all those working tirelessly to support the Rohingya living in the camps,” she said.