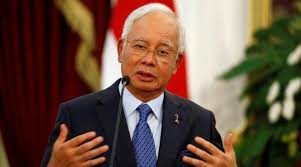 Malaysian Prime Minister Najib Razak says the displacement of Rohingya Muslims is no longer solely a domestic issue for Myanmar, as Southeast Asian nations signed a counterterrorism cooperation agreement at a regional leaders’ conference.
Najib made his comments on Saturday at a meeting of the 10 members of the Association of Southeast Asian Nations that is being hosted by Australia. The meeting has been marked by protests against Myanmar.
In a rare departure from the grouping’s policy of non-interference in the affairs of fellow member nations, Najib said Rohingya fleeing from alleged persecution are a prime target for radicalization from the Daesh group.
Leaders signed the memorandum of understanding on counterterrorism, at a time of increased risk due to militants fleeing Islamic State losses in the Middle East.