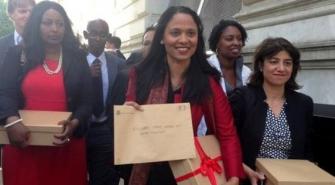 Rushanara Ali is entering the contest to be deputy Labour leader, with a pledge to target former supporters who have switched to UKIP.
She becomes the sixth Labour MP to declare that they want to succeed Harriet Harman in post.
Ms Ali told 5 live’s Pienaar’s Politics: “We should be radical and imaginative. What have we got to lose?”
“I’m going to start with going after UKIP voters who left Labour. We have to talk to people who rejected us.”
Asked how that would work with voters who have problems with multi-culturalism, she said: “I grew up in a working-class community. Some of my neighbours were not very friendly.
“I’m used to rejection so I think I have something to offer… I know what it feels like to be an outsider trying to get in… I think a lot of our voters feel like that – that they just couldn’t get through to us.”
Asked who she would back for leader, Ms Ali says: “I’m going to meet every single one of them. I will reserve my right to use my nomination powers to help someone struggling in the race get what they need to stand.”
She says Keith Vaz and Tristram Hunt are two MPs who have said they would back her bid.
The other declared candidates for deputy leader are Stella Creasy, Tom Watson, Ben Bradshaw, Angela Eagle and Caroline Flint.
The candidates for Labour leader are Andy Burnham, Yvette Cooper, Mary Creagh and Liz Kendall.
Earlier on Sunday former deputy Labour leader Lord Prescott told the Sunday Mirror he would be backing Andy Burnham for leader.
And Harriet Harman told the Andrew Marr Show that the leadership contests must not just be about who the best leader was, but what direction the party should take.
She said it would be “quite wrong” for Labour to “minimise the scale of our defeat”, especially given that it came despite a “lack of love for the Tories”.
Ms Harman also said she thought that either the leader or deputy leader positions must be filled by a woman, saying she had never been a fan of all-male leadership teams.
She also said that hundreds of thousands of people who voted Labour “but would never join the party” would be able to vote in the leader and deputy leader elections – something welcomed on the same programme by former David Cameron adviser Steve Hilton.
Mr Hilton, who added that he had been a long-time fan of Ms Harman’s work on gender equality, said it was important to get more people involved in politics. -BBC