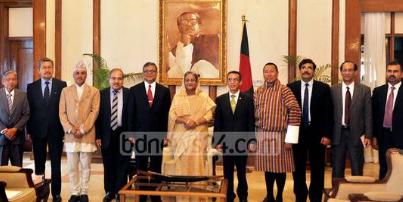 Prime Minister Sheikh Hasina today laid importance on dynamism and active initiative of the SAARC top government officials to execute the decisions taken at political leaders’ level.
She called for concerted efforts of the government officials of the SAARC countries particularly the top most ones, for execution of the decisions taken by the political leaders for betterment of the people of the region.
The prime minister said this when cabinet secretaries and officials of equivalent status of SAARC countries called on the Prime Minister at her Gonobhaban residence here today.
Cabinet secretaries of eight SAARC countries are now in Dhaka to attend a two-day meeting on April 26-27.
Political leaders adopt decisions, but those decisions are implemented by the government officials, he said, hoping that cabinet secretaries of SAARC countries would put in their coordinated efforts to execute the decisions of the SAARC leaders.
Briefing reporters after the call on programme, PM’s special assistant Mahbubul Hoque Shakil said the Prime Minister reiterated her call for united efforts of all to stamp out poverty from the region, terming it as the main common enemy of the region.
Sheikh Hasina also focused on necessity of coordinated efforts of the SAARC nations to stop arms smuggling and women and children trafficking and check other vices.
“Poverty is the common enemy of the SAARC region where a large portion of world population live. Other problems like arms smuggling and women and children trafficking are not possible to handle by a single country,” she said.
“To face the situation we need a coherent initiative and joint efforts to change the lot of toiling masses of the region,”she said.
Sheikh Hasina also laid importance on strengthening the market economy in the SAARC region saying we have do this through increasing purchase capacity of the people.
Underlining the goal of SAARC to make the region as a prosperous and peaceful one, the Prime Minister said, there is no alternative to peace and mutual cooperation among the countries to this end.
Secretary General of SAARC Secretariat Arjun B Thapa and Principal Secretary to Bangladesh Prime Minister Abdus Sobhan Sikder, among others, were present.
Cabinet secretaries extended their sincere thanks to the Prime Minister for her support to arrange their meeting in Dhaka saying they would make their best efforts for proper and quick execution of the SAARC leaders’ decisions. -BSS