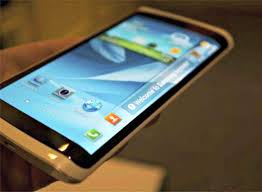 South Korean giant Samsung unveiled the next generation of its pioneering “phablet” and “smartwatch” gadgets at the IFA consumer electronics fair Wednesday in a bid to keep ahead of arch-rival Apple.
It also surprised technophiles with a virtual reality headset, the Samsung VR.
As media hype builds over the Apple’s latest launch next week, Samsung pulled out all the stops to push its own new Galaxy Note 4 at a special event held two days before the IFA officially opens its doors.
Berlin was the launch pad three years ago for Samsung’s first-ever “phablet” — a cross between a smartphone and tablet computer — the original Galaxy Note.
And the new devices are taking the markets by storm, particularly among mobile gamers in Asia.
The Galaxy Note 4 is “more enjoyable and more efficient” than its predecessors, said sales and marketing chief DJ Lee.
The new phone has been given a new design with a metal casing, a more resistant screen with better resolution.
Its built-in camera and microphone and its battery have also been optimised.
The Galaxy Note 4 comes with an electronic pen with which the user can multi-task between different applications and move pictures and deposit them where they want on the screen.
Simultaneously, Samsung unveiled the Galaxy Note Edge, which is another new version of its iconic device with a curved screen.
“Because the mainstream flagship smartphones have grown bigger, it is becoming harder for Samsung to differentiate the Note,” said IHS analyst Ian Fogg.
Another exciting new move by Samsung was its VR virtual reality headset, developed in collaboration with the Californian start-up Oculus Rift.
The headset acts as an add-on to the Galaxy Note 4, turning the image on the phone onto the immersive 3-D display and is targeted primarily at the video game market, said IHS analyst Piers Harding-Rolls.
The shadow of Apple is looming large over this year’s IFA — which opens on Friday — even though the iconic US brand traditionally snubs the five-day event, Europe’s biggest.
Apple has sent out invitations to a mystery unveiling of its own on September 9 and that is likely to upstage any of the announcements made by its rivals at the Berlin show, analysts said.
Rumours about Apple’s plans have been swirling for months, with many observers expecting it to unveil an iPhone 6, marking a move into the “phablet” sector.
But Apple might also unveil an “iWatch,” a wrist-worn device that links wirelessly to its iconic iPhones or iPads.
Samsung pioneered both the phablet and the smartwatch and presented a new version of the latter, the Galaxy Gear S, on Wednesday.