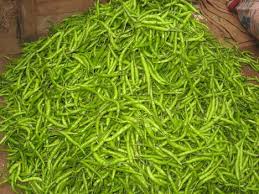 Saudi Arabia, the fifth-largest importer of fresh vegetables from India, has banned the import of Indian chili due to the presence of high pesticide residues in the commodity.
Confirming the announcement, Surinder Bhagat, second secretary of politics and commerce at the Indian Embassy, told Arab News on Thursday: “We have been informed about the Saudi Ministry of Agriculture’s decision to ban chili pepper beginning May 30.”
He added: “We are in touch with the Saudi authorities to resolve the issue.”
An official at the Ministry of Agriculture said that the decision to ban the import of chili peppers was made after a sample testing from the Indian shipment showed the presence of high levels of pesticides.
The Saudi Ministry of Agriculture decided to impose a ban on the import of chili pepper after issuing an advisory to the Indian Agricultural and Processed Food Products Export Development Authority (APEDA), stating that high levels of pesticide residues were detected in some consignments of green chili.
“It has been brought to the attention of the authorities here that in recent vegetable consignments from India, there have been interceptions of higher than permissible levels of residues of pesticides. If the situation persists, the government of KSA will take action in the near future,” the advisory read.
Subsequently, APEDA advised exporters to adhere to the Kingdom’s import requirements and urged the testing of products before they are exported.
“As a region, West Asia is very important to us. We, therefore, do not want to face repercussions from Saudi Arabia, or any other country in the region. Hence, we have advised our members to test export oriented goods carefully before shipping,” an APEDA statement said.
According to the Indian Spices Board, chili peppers are one of India’s largest foreign currency earners, and in the period between April and November 2013 a quantity of 181,500 tons of chili peppers were exported for the value of about $3 million.
The 28-member European Union (EU) temporarily banned the import of Alphonso mangoes and four other vegetables from India on May 1.
The decision made by the EU’s standing committee on plant health came after 207 consignments of fruits and vegetables imported from India in 2013 were found to be contaminated by pests such as fruit flies and other quarantine pests.