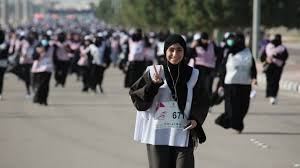 Women in Saudi Arabia participated in a marathon on Saturday for the first time in the kingdom’s history.
The 3-kilometer marathon took place in the eastern province of al-Ahsa.
“Al-Ahsa Runs” was the title used for the marathon, which was participated by 1,500 women in different categories such as professional, amateur, old and young.
The Saudi General Directorate of Sports, al-Moosa Hospital and al-Ahsa municipality sponsored the marathon.
Mizna al-Nassar of Saudi Arabia won the first place medal at marathon, leaving behind her rivals from different nationalities.