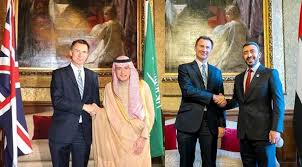 Saudi Arabia and the UAE met in London on Friday to discuss with the UK and US the next steps in the Yemen peace process. Minister of State for Foreign Affairs Adel Al-Jubeir took part in the meeting of the Yemen Quartet. The UK Foreign Office said the meeting discussed how best to support the efforts of UN Special Envoy Martin Griffiths.

A ceasefire between Yemeni government troops and Houthi militants was agreed for the key port of Hodeidah in December during talks in Sweden. But the implementation of the truce has stalled and the Arab Coalition supporting Yemeni forces has accused the Iran-backed Houthis of dozens of violations. The coalition includes Saudi Arabia and the UAE.

“I called this meeting so that we keep doing everything we can to move forward on the hard road to peace in Yemen,” UK Foreign Secretary Jeremy Hunt said. “This is a horrendous conflict and it is taking too long to turn the ceasefire agreed in Stockholm into a durable path to peace.”

The meeting was also attended by the UAE Foreign Minister Sheikh Abdullah bin Zayed Al-Nayan, and David Satterfield, a US acting assistant secretary of state.