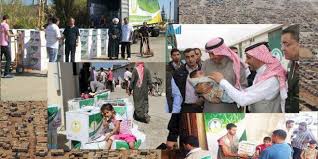 Saudi Arabia, which has carried out massive humanitarian and relief operations across the globe, helping people reeling from the effects of natural disasters or civil wars, ranks first among donor nations.
“The total Saudi humanitarian and development assistance worldwide exceeded a whopping SR54 billion in 2014,” Abdullah Al-Rabeeah, general supervisor of King Salman Center for Relief and Humanitarian Aid, said on Sunday.
The Kingdom’s total financial commitment to aid is very high when compared with that of other nations, he said after formally launching the report, “Official Development Assistance of Saudi Arabia”.
Top Saudi and UNDP officials, including Ashok Nigam, the Riyadh-based UNDP resident representative and UN resident coordinator, attended the event.
Al-Rabeeah said the Saudi aid of SR54 billion for humanitarian and developmental assistance worldwide represents 1.9 percent of the nation’s Gross National Income (GNI).
These figures place the Kingdom first among all nations in terms of donations as a proportion of national income, and fourth in the total amount donated, he added.
He said the report on Saudi aid and assistance was prepared in cooperation with the Ministries of foreign affairs and finance, Saudi Fund for Development (SFD) and the UN Development Program (UNDP).
Al-Rabeeah said Saudi Arabia provides immediate response and rapid intervention wherever humanitarian crises occur.
“The Kingdom mobilizes its official and pubic aid effort quickly and efficiently to reduce human suffering and bring urgent relief to those in need.”
The achievements of the King Salman Center for Relief and Humanitarian Aid has made it a truly international charity working in different countries, he said.
The Saudi aid agency was established last year following instructions from Custodian of the Two Holy Mosques King Salman.
Speaking on the occasion, Nigam, said the King Salman center will in future be the entity providing Saudi ODA data to international agencies.
“The UNDP is pleased to have had the opportunity to work with the Saudi government to bring the magnitude and diversity of Saudi development and humanitarian assistance to a wider audience based on available data and information provided by the ministry of finance and the SFD,” he said.
The report articulates the extensive nature of the development and humanitarian assistance that has been provided by the Kingdom over the years, said the UNDP official.
“It shows that in recent years, Saudi Arabia has increased its assistance significantly; and in 2014, it reached 1.9 percent of GNI — the largest globally for 2014 bases on this ratio — far surpassing the target of 0.7 percent of GNI.”
Nigam pointed out that the total assistance went up dramatically in absolute amounts in 2014, to reach a high of $14.5 billion.
“Saudi Arabia also ranks among the top 10 donors in dollar value in the 10-year period from 2005 to 2014,” he said.
The report highlights the significant humanitarian assistance that the Kingdom has been providing along with grants and concessional loans.
Referring to the new policy of the Kingdom, Nigam said Saudi Vision 2030 has committed to provide opportunities for all and strive for partnerships with the private sector, non-profit sector, citizens and international experts.
“Continued commitment by the Kingdom to official development assistance will be important for achieving regional and global results,” he said, pledging to work closely with the Kingdom to achieve Vision 2030 for sustainable development. –GHAZANFAR ALI KHAN