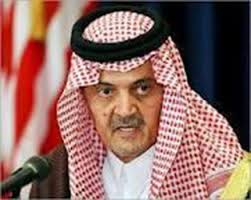 Saudi Arabia’s former foreign minister Prince Saud Al Faisal died on Thursday at the age of 75, two months after he was replaced following 40 years in the job, family members and a foreign ministry spokesman said.

Nawaf al-Faisal, a relative, announced the death on Facebook, while a foreign ministry spokesman also confirmed the death on Twitter and expressed condolences.

“I wish I could deny the rumour of the news of your death,” the spokesman Osama Nugali tweeted.

Prince Saud’s nephew Saud Mohammed al-Abdullah al-Faisal also acknowledged the death of the veteran diplomat. “May God accept him in paradise,” he wrote on Twitter.

Prince Saud, who was appointed in 1975, was the world’s longest serving foreign minister when he was replaced on April 29 by Adel al-Jubeir, the then ambassador to Washington.

U.S. President Barack Obama and Secretary of State John Kerry paid heartfelt tribute to the late diplomat, saying he had left a legacy that would live on despite his death.

Obama described him as a “committed and accomplished diplomat.”

“Generations of American leaders and diplomats benefited from Prince Saud’s thoughtful perspective, charisma and poise, and diplomatic skill,” he said in a statement.

“He was committed to the importance of the U.S.-Saudi relationship and the pursuit of stability and security in the Middle East and beyond, and his legacy will be remembered around the world.”

The prince, who was born in 1940, was one of the highest profile members of Saudi’s ruling elite and steered the diplomacy of the world’s leading oil exporter for four decades before stepping down in April for health reasons. The veteran diplomat was fluent in seven languages but chose to conduct his high-profile press conferences and interview in his mother tongue, according to Al Arabiya.

He oversaw Saudi Arabia’s emergence as a major diplomatic player, facing successive regional crises and maintaining a focus on relations with the West.

“The longevity of his term in office — he served with 13 U.S. secretaries of state — is a sign of the universal respect with which he was viewed,” Kerry said in separate statement from Obama.

“I personally admired him greatly, valued his friendship and appreciated his wise counsel. His legacy as a statesman and diplomat will not be forgotten.”

Prince Saud retained an influential position in Saudi foreign policy circles even after his replacement, serving as an official adviser to King Salman, who took power in January, and was sometimes present when foreign leaders met the monarch.