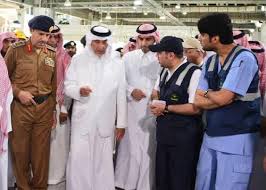 Prince Khaled Al-Faisal, emir of Makkah and advisor of Custodian of the Two Holy Mosques, conveyed the condolences of Custodian of the Two Holy Mosques King Salman and Crown Prince Muhammad Bin Naif, deputy premier, minister of interior and chairman of the Supreme Haj Committee, to the bereaved family members of those who died in the Haram crane crash.
The emir visited the accident scene and the hospitals where the injured pilgrims were undergoing treatment. “May Allah forgive the deceased and accommodate them in Paradise,” he said, while also praying for the speedy recovery of those injured.
Speaking to reporters on Friday night at the accident scene, Prince Khaled said that two committees have been formed to probe into the accident. The emir has also ordered the renovation of the accident scene within the coming two days.
Later, visiting the injured at various hospitals, Prince Khaled said that their injury would not prevent them from performing Haj pilgrimage. “We will take them to the holy sites on board the well-equipped ambulances of the Ministry of Health,” he said.
Meanwhile, King Salman received telephone calls from several leaders, including Egyptian President Abdel Fattah el-Sisi, Turkish President Recep Tayyip Erdogan, and Bahrain’s King Hamad Bin Isa Al Khalifa, offering condolences over the death of pilgrims in the Haram accident.