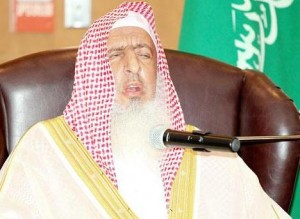 Saudi Arabia’s highest religious authority, the grand mufti Abdulaziz Al al-Sheikh, has told young Saudis they should not go to Syria to fight in the civil war.
Saudi Arabia has backed the rebels battling Syrian President Bashar al-Assad sent weapons, and called on world powers to “enable” Syrians to protect themselves.
“This is all wrong, it’s not obligatory,” the grand mufti said in a lecture, according to a report on Monday in the Saudi newspaper Al-Hayat.
“These are feuding factions and one should not go there. I do not advise one to go there … Going to a land that you do not know and without experience, you will be a burden to them, what they want from you is your prayer.”
The grand mufti, appointed by the Saudi king, also warned preachers against encouraging young men to fight in Syria during their sermons, after delivering what the paper said was a lecture on “Deviation among the youth” at a mosque.
“Muslim should be fearful of God and not deceive young Muslims and exploit their weakness and lack of insight and push them to an abyss,” the mufti was quoted by the newspaper.
“I advise them to advise as they would advise their sons.”
Saudi Arabia is wary that fighters could return home and use their experiences against the kingdom’s rulers.
Saudi-born Osama bin Laden, the creator of al-Qaeda, turned on the Saud family after fighting in Afghanistan against the Russians.
Sunni Muslim al-Qaeda fighters attacked targets inside Saudi Arabia between 2003 and 2006.
A Gulf Arab source familiar with military movements in the region said in September 2012 that thousands of Saudis travelled to Syria to join the rebels. It is not known how many succeeded.