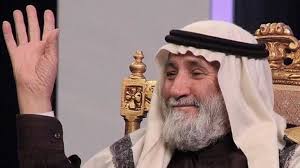 Saudi poet Hejab bin Naheet passed away at the age of 74 from a sudden illness on Sunday morning in Riyadh.
Naheet was known for his romantic and national poems recorded on vinyl that were hugely popular in the 70s and 80s, before he quit the entertainment career and began social work.
The poet has several children and grand children, who also followed in his footsteps in loving poetry. Among them are poets Abdullah, and Zeyad, who the reality TV-show “Million’s Poet” in 2009.