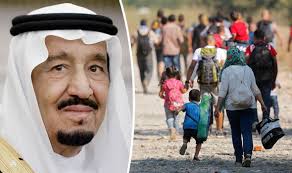 Saudi Arabia has received around 2.5 million Syrians since the start of the conflict in their country, an official source in the Saudi Ministry of Foreign Affairs (MoFA) has revealed, elaborating that the Kingdom has adopted a policy not to treat these Syrians as refugees, or place them in refugee camps “in order to ensure their dignity and safety.”
Speaking to the state-run Saudi Press Agency (SPA), the MoFA official explained that Saudi Arabia initially did not “intend to speak about its efforts to support Syrian brothers and sisters, during their distress, as it has, since the beginning of the problem,” adding that “Saudi Arabia dealt with the situation from a religious and humane perspective, and did not wish to boast about its efforts or attempt to gain media coverage.”
However, given what he slammed as media reports containing “erroneous and misleading information,” the Saudi official told SPA that the Kingdom now considers it important to discuss its efforts with “appropriate facts and figures,” as he stated the following:
1. The Kingdom has received around 2.5 million Syrians since the beginning of the conflict. In order to ensure their dignity and safety, the Kingdom adopted a policy that does not treat them as refugees or place them in refugee camps. They have been given the freedom to move about the country and those who wish to remain in Saudi Arabia (some hundreds of thousands) have been given legal residency status. Their residency comes with the rights to receive free medical care, to join the labor market and to attend schools and universities. This was contained in a royal decree in 2012 that instructed public schools to accept Syrian students. According to government statistics, the public school system has accepted more than 100,000 Syrian students.
2. The Kingdom’s efforts were not limited to accepting our Syrian brothers and sisters after their crisis; it also extended its efforts to support and care for millions of Syrian refugees in neighboring countries such as Jordan, Lebanon and others. Efforts included providing them with humanitarian assistance, in coordination with the host governments and with international human aid organizations. Aid was provided, in cash and kind.
3. The aid provided by Saudi Arabia to the Syrian people totals around $700 million, according to the statistics of the Third International Humanitarian Pledging Conference for Syria, which took place in Kuwait on March 31, 2015. Government aid and aid provided by the National Campaign, are included in that number.
4. Humanitarian aid provided to Syrians by the Kingdom consisted of food, medical, academic, residential supplies and included the establishment of Saudi specialized clinics in refugee camps, especially at Zaatari Camp in Jordan. The Kingdom was able to provide medical care in the form of immunization, preventive treatment and medical procedures. In addition, Saudi Arabia sponsored a large number of Syrian families living in Lebanon and Syria (specifically, through paying for their rent and living costs).
The ministry official concluded his statements to SPA by saying that: It is apparent from the previous facts, that the Kingdom of Saudi Arabia will remain a leader among other countries supporting Syrian people and it is impossible to outbid its efforts in this matter, or to question its position in any way or form, the statement concluded.