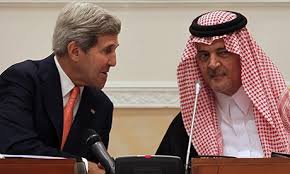 Saudi kingdom said it was not opposed to the Iran having a peaceful nuclear program.
“The nuclear talks should guarantee Iran’s right to have a peaceful nuclear program,” Saudi Foreign Minister Saud al-Faisal said.
He added, however, at a joint press briefing with U.S. counterpart John Kerry in Riyadh, that the ongoing talks should prevent Iran’s nuclear program from being used to make weapons.
Iran has been locked in intensive talks with world powers over its nuclear program. But the talks have not produced a deal so far, as the Iran continues to stress its right to enrich uranium and have its own nuclear program.
The program has caused particular concern in the Arab Gulf, where Sunni-majority states shudder in fear at the prospect of Iran having a nuclear bomb.
The Iranian nuclear program is also causing concern in Israel, where decision-makers insist that a nuclear bomb would enable Iran to put into practice its threat of eliminating Israel from the world map.
Kerry, meanwhile, said the results of the nuclear talks with Iran would have strong ramifications on relations between the Iran and the U.S., as well as on relations between Iran and the states of the Gulf.
He said the U.S. would make sure that Iran would not develop a nuclear weapon, noting that talks between Iran and world powers were making progress.
Nevertheless, the U.S. secretary of state added that he was not sure whether a deal would be reached on Iran’s nuclear program.
He said a deal would depend on whether Iran would be able to offer concessions as far as its nuclear program is concerned.
Kerry said that, as the international community negotiated with Iran over its nuclear program, it would not turn its eyes away from its activities in other areas, including Syria and Yemen.