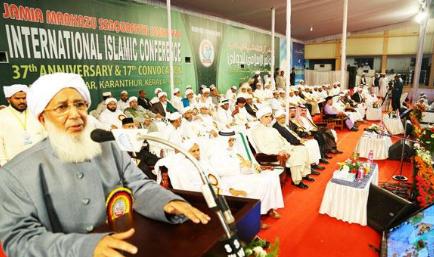 The 37th anniversary meet of India’s Jamia Markazu Ssaqafathi Ssunniyya concluded here on Sunday with a call for embracing Islam’s message of peace against terror. The four-day meet condemned “the shameless use” of religious symbols to justify crimes against humanity.
Dr. Faiz Al-Abideen, a special adviser to the Saudi Royal Family, in his concluding speech said: “This is one of the greatest gathering of the Muslim students I have ever seen in any part of the world.” He thanked Sheikh Rafeeque of Gammon Saudi Arabia for inviting him to India and helping employ a large number of Indians in Saudi Arabia.
“The Kingdom has deep-rooted relationship with India, especially with you people in Kerala. We love people of India because India gives religious equality,” he said.
The meet also offered a mass prayer on the opening day for the innocent victims of last week’s terror attack on a school in Pakistan’s Peshawar.
Dr. Hashim Mahdi of the Muslim World League delivered the keynote address at the valedictory session addressed by several scholars, including those from Qatar and Saudi Arabia and ambassadors to New Delhi, on Sunday.
Tens of thousands of people from across India and some 300 delegates from abroad, mainly from the Gulf countries, gathered on its campus in Kerala, the largest of its kind in India.
A resolution adopted by the the meet urged the world community to “reinvent the incredible potential” of Islam to deal with the “retrogressive forces” that are unleashing terror across the world.
Oommen Chandy, chief minister of the state who inaugurated the Sheikh Zayed International Peace Conference on the third day on Saturday, lauded the contributions of Markaz in spreading the message of education and peaceful coexistence.
“Markaz plays a great role in countering the forces indoctrinating youngsters the message of hate,” he said.
The chief minister also lauded the Gulf nations where nearly 2.5 million people from the state live. He said he was happy to see a large number of Arab nationals attending the conference.
Sheikh Aboobacker Ahmed, founder and chancellor of the Jamia Markaz and General Secretary of All India Sunni Jam’iyyat Al Ulama, delivered the keynote address while Power Minister Aryadan Muhammed honored NRI businessman MA Yusuff Ali MA for his philanthropic contributions.
Taking exception to mass religious conversions with the support of Prime Minister Narendra Modi’s BJP party, Ahmed said it was strange that those who had been demanding laws against conversions are now practicing it.
“Islam by no means require conversion by force or temptations,” he said. “The nation will only benefit from those believers who practice eternal virtues of faith.”
More than half a dozen ministers, several legislators and lawmakers and leaders of various political parties attended various sessions.
“No believer is entitled to transgress one’s life and property. It has to be stressed again and again that no Muslim needs the destructive force that the terrorists unleash,” its resolution said.