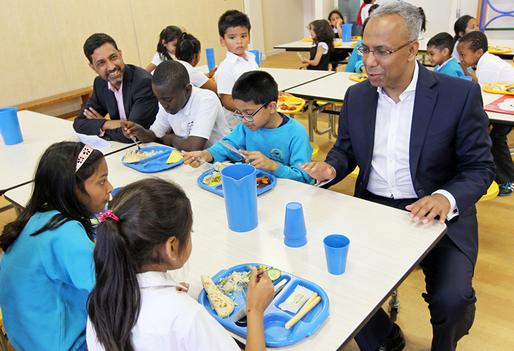 Children in Tower Hamlets are enjoying the best school meals service in the country, it has been announced.
Tower Hamlets Council’s Contract Services team, which provides 24,000 local children with lunches every day, was named Catering Business of the Year at the annual Lead Association for Education Catering (LACA) Awards – the Oscars of the school catering industry.
Judges said it had made an “outstanding” contribution to catering for schools in the local area.
It is the second time the team has won the award, following on from its 2005 success, and Tower Hamlets is the first council to have won the accolade twice.
The prestigious award, the highest honour in the industry, comes as the council is about to start providing free school meals for every primary school pupil in the borough.
Tower Hamlets Mayor Lutfur Rahman said: “I am hugely proud of this award and cannot thank the Contract Services team enough for all their hard work.
“Our schools are rightly regarded as being among the best in the country, if not the world – and providing children with hot, healthy, nutritious meals is a significant factor in this success. Healthy children make better learners, and this is why we have taken the bold step of providing free meals for all our primary school pupils.”
The council supplies meals for almost all 100 primary and secondary schools in the borough, all of which are cooked fresh in the schools’ kitchens.
Every day it provides 24,000 meals in schools, which will rise to more than 30,000 a day from September when the council’s free school meals policy is introduced. Under the scheme, every primary school pupil, regardless of their family’s income, will receive a free school meal. This is going beyond the government’s new scheme, which will provide meals up until Year 2.
Cllr Gulam Robbani, cabinet member for children’s services, said: “On behalf of the children and the parents of this borough, I would like to thank the Contract Services team for their magnificent achievements. After all, it is the children of Tower Hamlets who benefit from their outstanding hard work.”
Michael Hales is the manager of the Contract Services team. He said: “My team and I are absolutely delighted to have been recognised in this way for a second time.
“It demonstrates the dedication and commitment that all the catering team – from the kitchen assistants serving the food each day to my management team – put into to providing the best services we can in changing and challenging times.
“We are looking forward to providing free school meals for all primary school pupils from September.”
The LACA Awards were held in Birmingham on Thursday, July 10.
The Catering Business of the Year award recognised Tower Hamlets’ achievements in providing an extra 4,000 meals from last September, when its initial free school meals scheme, for Reception and Year 1 pupils, was introduced. The idea was soon picked up by the government and rolled out nationwide to also include Year 2 pupils.
Tower Hamlets has now expanded its scheme even further, by including Years 3, 4, 5 and 6 from the start of the next academic year in September.
The service holds the Silver Food for Life Catering Mark, an official stamp of approval from the Soil Association that all its food is organic, fresh and from sustainable sources. It hopes to achieve the Gold standard by 2015.
The Contract Services team also cleans half of the schools across Tower Hamlets and prepares and delivers hot, fresh meals to elderly and vulnerable people in the community through its Meals on Wheels services. It is the only London borough to cook fresh Meals on Wheels each day. It also prepares Hackney Council’s Meals on Wheels.