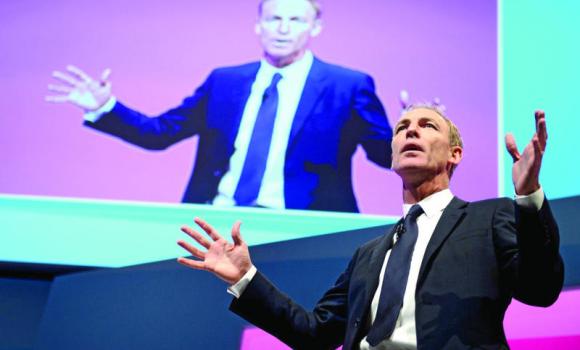 The opposition Labor party has chosen former Cabinet Minister Jim Murphy as its leader in Scotland where he will have the job of trying to hold on to the seats the party needs to win a British national election due in May.
The former Secretary of State for Scotland, who won 55 percent of the vote, needs to rejuvenate the Scottish Labor party which faces a tough challenge from nationalists who could potentially derail Labor’s chances of winning a majority in the polls next year.
Murphy, who was the favourite to win, became well-known for his soap box brand of pro-union patriotism during September’s referendum on independence.
His public profile rose during the Scottish referendum campaign when he toured the streets of 100 Scottish towns, hosting debates standing on top of an upturned crate of Irn-Bru, the bright orange fizzy drink popularly referred to as “Scotland’s other national drink.”
Speaking after Saturday’s result, Murphy tried to reach out to the 45 percent of Scots who had backed the Scottish National Party’s campaign for independence from Britain, which included many Labor supporters tempted away by the nationalists.
“I and the Scottish Labor Party share so much more in common with … (the) values of those many hundreds of thousands who voted ‘yes’ in the referendum than we do with many of the political leaders who campaigned for ‘no’,” he said.
Britain’s ruling Conservatives and Liberal Democrats joined forces with Labour to oppose Scottish independence, but are now preparing for the national elections where some polls predict no party could end up with a majority.
Scotland, traditionally a Labor stronghold, is crucial to Labor leader Ed Miliband’s chances of winning power in May 2015. But the party faces an uphill struggle to retain its 41 Scottish lawmakers who sit in the British Parliament.
A YouGov poll published in The Sun newspaper on Saturday showed the SNP twenty points head of Labor, meaning Miliband’s party would hold onto just seven Scottish seats, a serious blow to his election chances. An October poll had shown the party would hold onto just four seats.