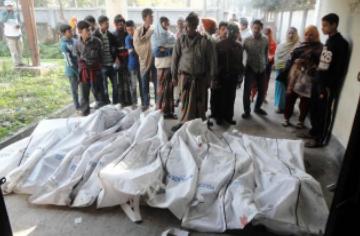 Anti-government protesters firebombed a bus full of sleeping passengers in eastern Bangladesh on Tuesday, killing seven in spiralling political unrest aimed at toppling Prime Minister Sheikh Hasina.
Several passengers were also critically injured in the attack in Chuddogram town blamed on activists from the main opposition Bangladesh Nationalist Party (BNP) led by two-time former premier Khaleda Zia.
The deaths brought the number of people killed in the month-long protests to 53 — most of them victims of firebomb attacks on buses and lorries — as opposition activists try to enforce a transport blockade.
“Seven passengers were burnt to death in the bus after the petrol bomb was thrown at 4am (2000 GMT Monday),” district police chief Tuttul Chakrabarty told AFP by phone.
“Five of the passengers are fighting for their life as 40-80 percent of their bodies were burnt. They have been shifted to a hospital in the capital,” he said.