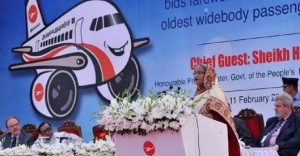 Prime Minister Sheikh Hasina Tuesday opened third Boeing-777-300ER aircraft named “Akash Pradip”  in the national air fleet.
Addressing a function on the occasion at Hazrat Shahjalal International Airport (HSIA), she expressed hope that the fourth generation jet would help develop country’s aviation industry as well as image abroad.
“I firmly believe that Biman Bangladesh Airlines would be a viable organization and earn honour for the nation if its officials and employees work sincerely and with professional spirit,” she said.
Earlier, the new aircraft arrived at the Airport on February 7 after as US-based Boeing handed over its fourth generation aircraft to Biman in Seattle, the USA on Thursday.