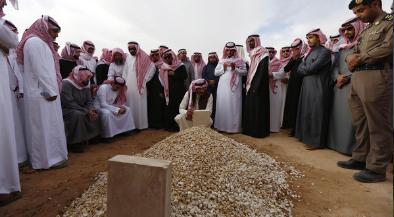 Late Saudi Arabia’s King Abdullah was carried in a simple white cloak to an unmarked grave on Friday in a Riyadh cemetery where many of citizens rest, in keeping with burial traditions.
King Salman bin Abdulaziz ordered absentee funeral prayer to be held at mosques throughout the kingdom.
The afternoon prayer that preceded the late king’s burial took place before ranks of Muslim leaders, Saudi princes and religious scholars, his body was transported to the mosque in a city ambulance.
It was borne through the crowds on a carpet on a simple stretcher, laid in front of the faithful at prayer and then carried by the late king’s male relatives to the graveyard, where it was laid in the ground with no ceremony.