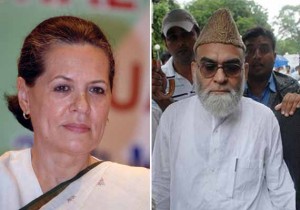 Delhi Jame Masjid’s Imam Syed Ahmed Bukhari led a delegation of Muslim maulanas on Tuesday to meet Congress President Sonia Gandhi, who told them that she joined politics only in order to protect “secularism”.
Bukhari quoted Sonia Gandhi as saying: “One of the main reasons I entered politics was to safeguard and promote secularism”.
Sonia Gandhi however appealed to the Muslim clerics not to divide the Muslim vote and stop the “secular vote” from splitting.
Sonia Gandhi, sources said, also told the delegation of maulanas that Muslims may be having lots of grievances relating to their welfare schemes, but the secular credentials of Congress cannot be questioned.  “Our jurisdiction towards helping Muslims stops at the states where the state governments implement these schemes”.
Immediately, BJP spokesperson and noted journalist M J Akbar lashed out at the Congress saying, “you can’t sell votes. This is an insult to politics and democracy, where you seek votes in the name of religion”.