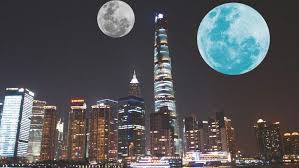 China is planning to launch its own ‘artificial moon’ by 2020 to replace streetlamps and lower electricity costs in urban areas, state media reported on Friday.
Chengdu, a city in southwestern Sichuan province, is developing “illumination satellites” which will shine in tandem with the real moon, but are eight times brighter, according to China Daily.

The first man-made moon will launch from Xichang Satellite Launch Centre in Sichuan, with three more to follow in 2022 if the first test goes well, said Wu Chunfeng, head of Tian Fu New Area Science Society, the organisation responsible for the project.

Though the first launch will be experimental, the 2022 satellites “will be the real deal with great civic and commercial potential,” he said in an interview with China Daily.
By reflecting light from the sun, the satellites could replace streetlamps in urban areas, saving an estimated 1.2 billion yuan ($170 million) a year in electricity costs for Chengdu, if the man-made moons illuminate an area of 50sq km.

The extraterrestrial source of light could also help rescue efforts in disaster zones during blackouts, he added. AFP was not able to contact Wu nor the Tian Fu New Area Science Society to confirm the reports.

As China’s space programme races to catch up with that of the United States and Russia, a number of ambitious projects are in the pipeline.