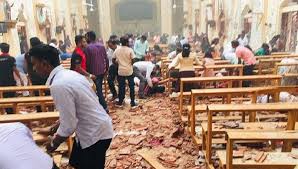 A series of eight devastating bomb blasts ripped through high-end hotels and churches holding Easter services in Sri Lanka on Sunday, killing at least 207 people, including dozens of foreigners. The attacks were the worst act of violence to hit the country in the decade since the end of a bloody civil war that killed up to 100,000 people.

For many in Sri Lanka, the apparently coordinated attacks brought back painful memories of life during the long-running conflict, when bomb blasts were a frequent occurrence. There was no immediate claim of responsibility but the government said eight people had been arrested and investigators would look into whether the attackers had “overseas links.”

At least two of them involved suicide bombers, including one who lined up at a hotel breakfast buffet before unleashing carnage. By Sunday evening, the toll stood at 207 dead and 450 people injured.

Police said 35 foreigners were among the dead, including British, Dutch, Portuguese, Chinese and American citizens. US Secretary of State Mike Pompeo confirmed that “several US citizens” were killed.

Among the churches targeted was the historic St Anthony’s Shrine, a Catholic church in Colombo, where the blast blew out much of the roof. Bodies lay on the ground of the church, covered in patterned scarves and white sheets, some of them stained with blood. Shattered roof tiles and shards of glass littered the floor, along with chunks of plaster blasted from the walls by the explosion.