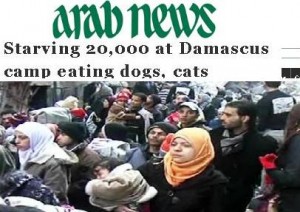 Starvation and illnesses exacerbated by hunger or the lack of medical aid in a Palestinian camp in Damascus besieged for months by forces loyal to Syrian President Bashar Assad have killed at least 85 people, activists said Wednesday.
The Yarmouk camp, located on the southern edge of the Syrian capital, is one of several opposition areas where humanitarian conditions have crumbled under a tight blockade imposed by pro-government forces. Activists and aid groups have accused the military of using starvation as a weapon of war.
According to residents, some 20,000 people in the camp are so desperate for food that many eat stray animals, and some women have resorted to prostitution.
“Many here have slaughtered and eaten cats and dogs, and even a donkey,” said Yarmuk resident Ali, who was a university student when Syria’s revolt erupted in 2011. “One man who killed a dog couldn’t find any meat to eat on its body, because even the dogs are starving,” he told AFP. “What was unimaginable a few months ago is normal now.”
When war spread to areas of Damascus in the summer of 2012, thousands of people from other parts of the capital fled to Yarmouk, swelling its population further.
Yarmuk soon became a war zone too, as Syrians taking up arms against Bashar Assad’s regime moved into the camp. In June, the army imposed a total blockade on Yarmouk, which covers an area of just over 2 sq. km.
“The situation is so desperate that women are selling their bodies to men who stocked up food before the siege was imposed, for just a cup of rice or bulgur,” said Ali. “Imagine the feeling of a father unable to feed his children, as they wail from hunger,” he added.
The Britain-based Syrian Observatory for Human Rights has said the first person died in Yarmouk in June, and that as of Wednesday a total of 85 people had perished there. Five days ago, activists and residents said the death toll stood at more than 60.
The need to open humanitarian corridors to ferry desperately needed aid into blockaded areas and to relieve civilian suffering has been one of the topics discussed at ongoing peace talks in Switzerland between the Syrian government and the opposition. Despite encouraging signs early in the discussions, no concrete progress has been made on that front.
Authorities recently allowed a few hundred food parcels into Yarmouk in what appeared to be a goodwill gesture ahead the peace talks, but residents said only a tiny amount of aid entered because government officials ordered aid workers to distribute the parcels in an area under sniper fire.
Also Wednesday, Turkey’s state-run news agency said the Turkish military fired artillery and heavy machine guns at a convoy across the border in Syria belonging to the Al-Qaeda-linked Islamic State of Iraq and the Levant.
The Anadolu Agency said the attack on the Islamic State vehicle was in response to gunfire that had targeted Turkish troops patrolling the frontier at the border in Kilis province. Turkish troops used tanks, self-propelled artillery and machine guns to destroy two trucks and a bus in the convoy, the agency said. No casualty figures were given.
The military declined to immediately confirm the report.
In October, Turkey’s military fired artillery at Islamic State of Iraq and the Levant positions in Syria in retaliation for a mortar that had landed near another Turkish military post.
The Islamic State and another Al-Qaeda-linked group, the Nusra Front, have become a dominant force in Syria’s armed opposition, causing jitters in Western capitals and leading to a drop in international support for the rebels. -Arab News