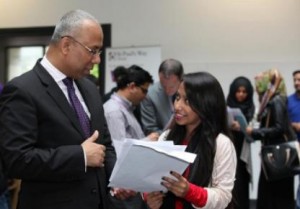 Students have been celebrating their GCSE results at St Paul’s Way Trust School with the Mayor of Tower Hamlets.
The school maintained its dramatic turnaround in recent years with an impressive 58 per cent of students achieving five grades of A* to C including maths and English. This matched last year’s performance and demonstrated the scale of the improvement since 2008 when just 23 per cent of students achieved this standard.
The school has also experienced a 10 per cent year-on-year rise in the number of students achieving the English Baccalaureate – given for attaining top A* to C grades in English, maths, science, a modern foreign language and history or geography.
Mayor Lutfur Rahman spent the morning at St Paul’s Way congratulating students and staff.
School headteacher Grahame Price said: “We are all very proud of the achievement of our students this year and are grateful for the untiring support we have received from parents working in partnership with us.
“This year many more of our students were following the English Baccalaureate and our results in subjects such as French and history have risen dramatically.”
Enamur Rahman, 16, was the school’s top performer with an A* and seven A grades among his results.
“I’m relieved, I’m shocked,” he said. “I didn’t know I was going to do that well, I thought I would do alright.”
Enamur will stay at the school at its new sixth form, which only opened last year, to study economics, geography, maths and ICT.
He had warm words for the transformation the school had undergone while he had been studying there.
“In the past students did whatever they felt like but now it’s more controlled. When Mr Price came in as headteacher, that’s when most of the changes happened.”
Mayor Rahman said: “It was inspiring to meet so many dedicated and driven young people at St Paul’s Way Trust School. It was clear they have got the most out of the wonderful new facilities at this transformed school.
“Today is about celebration and it is clear there is much to cheer at schools right across this borough. However, my thoughts are also with students and staff at Langdon Park School, for whom today takes on special significance after the sudden and tragic loss last week of Ajmol Alom.
“Ajmol would have been collecting his results today and they were very fine results which his family and friends will be extremely proud of. I would like to pay tribute to everyone who has helped the school and the community unite after Ajmol’s death.”
Cllr Oliur Rahman, the cabinet member for children, schools and families, said: “Congratulations to every student in the borough on their results today. The greatest attention will, understandably, be on those students who gained the top grades but I know there are hundreds of other success stories about local teenagers who have overcome incredible adversity to achieve what they have done.
“I want everyone to be proud of their achievements and I wish you all well for the next stage in your education. For those young people who did not get the grades they hoped for, there is no need to despair because expert help is available. Just contact our Careers service on 020 7364 1401 or careers.service@towerhamlets.gov.uk.”
Other notable achievers at St Paul’s Way Trust School included Salma Musa, 16, who only joined the school in October last year after deciding to switch from an independent school.
She said: “I felt that I needed to change schools because I wasn’t experiencing a lot at my old school so I came here and St Paul’s Way Trust helped me and taught me a lot in the past few months.”
Salma passed all six GCSEs she took, including two As, adding to the B-grade maths GCSE she achieved a year early at her previous school.
“I dreamed that I passed all my GCSEs and now I have,” she said. She aims to study A-levels at the school’s sixth form in classics, English literature, religious education and history.
Nadia Tahmin, 16, was delighted with her three As, four Bs and three Cs. She said: “I couldn’t believe it. I was in tears last night because I didn’t expect to do this well. I’m feeling so good, I’m over the moon!”
Nadia will also stay on at the St Paul’s Way sixth form to study English language, English literature and maths in pursuit of a career in engineering.