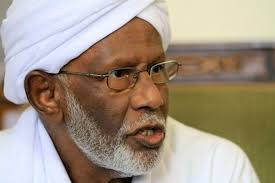 One of the world’s leading Islamic political thinkers and activists, Dr Hasan al-Turabi, has passed away in Khartoum at the age of 84.
A specialist in Islamic Law, he had contributed many books on the subject as well as served in various capacities in political office. Close to many Sudanese leaders, he eventually fell out with them ending in prison on numerous occasions, Crescent International reports.
After suffering a heart attack at his office on Saturday morning, he was rushed to the Royal Care International Hospital in Khartoum. He slipped into a coma and did not recover and was pronounced dead in the evening.
After studying at Khartoum University, Dr Turabi went to Britain and enrolled at King’s College London for a law degree. After graduating from there, he went to Sorbonne University in Paris, France for a PhD in Islamic Law.
Once back in Sudan, he exercised considerable influence in politics serving in various capacities including Speaker of Parliament, Attorney General as well as Foreign Minister. He was also close to several Sudanese leaders exercising considerable influence over their policies but eventually falling out with them and ending up in prison.
He was jailed on numerous occasions, the last being on January 17, 2011 for nine days when he led protests in support of the Islamic Awakening movements sweeping the Middle East and North Africa.
In his political career, he was initially close to Jafaar al-Numeiri who brought about a military coup in Sudan in the late seventies and early eighties. But he fell out with him and was imprisoned.
Dr Turabi was also initially close to General Omar al-Bashir who also came to power through a coup and is currently the president of Sudan. He fell out with him as well although the two were politically close for nearly a decade.
Fluent in English, French and German besides Arabic, Dr Turabi was able to reach Western audiences and intellectual circles through the media.
Since falling out with Bashir, he had been fiercely critical of his government’s policies and was the only Sudanese politician to support the International Criminal Court (ICC) warrant for Bashir’s arrest on charges of war crimes, crimes against humanity and genocide.