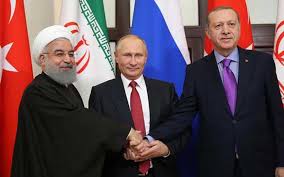 Russian media on Thursday saw the tripartite meeting among leaders of Turkey, Russia and Iran on Syrian crisis as a “summit of peacemakers.”
The summit was held on Wednesday in Turkey’s capital Ankara with the participation of Turkish President Recep Tayyip Erdogan, Russian President Vladimir Putin, and Iranian President Hassan Rouhani.
The joint declaration following the summit stressed resolve to oppose separatism as well as the use of terrorism as an excuse for changing Syria.
Rossiyskaya Gazeta, a Russian government daily newspaper, published a news story with the title Summit of Peacekeepers.
The daily noted that the meeting took place in a constructive atmosphere and the major problems were discussed in a “practical manner”.
“The leaders talked about the future of Syria and reaffirmed their determination to fight terrorism and oppose separatist plans,” it highlighted.
Kommersant, another daily, dubbed the leaders of the summit “triathletes for peace.” The story published in the newspaper highlighted “unprecedented frankness” among the three leaders during the news conference.
In the summit, the presidents reaffirmed their determination to continue their active cooperation on Syria for the achievement of a lasting cease-fire between the conflicting parties and advancement of the political process as envisaged by UN Security Council Resolution 2254.
Vedomosti, a Russian language financial daily, noted that the summit paid much attention to the humanitarian aspect of the Syria settlement, as well as the post-war reconstruction of the country.
The financial daily said the European Union and the United States always talk about a humanitarian catastrophe in Syria, but they do not rush to provide assistance under the preposition that it could be used by Bashar al-Assad’s regime.
Izvestia, a long-running high-circulation daily newspaper, commended the summit, saying the three countries have showed the world as to how problems are resolved with the strength of diplomacy.
“The joint summit of the leaders of Iran, Russia and Turkey was dedicated to coordinating efforts to reduce the confrontation in Syria,” the daily said.