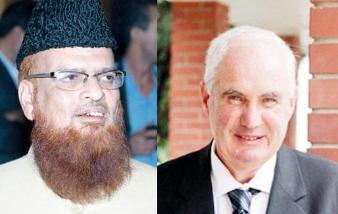 The Islamic Development Bank has announced Shaikh Muhammad Taqi Usmani from Pakistan and professor Rodney Wilson from the United Kingdom as the joint winners of the 2014 International Development Bank (IDB) prize in Islamic banking and finance.
The award comes in recognition of the professional and academic role they have played in advancing Islamic finance and banking regionally and globally.
The prize will be awarded to the winners during the upcoming 39th annual meeting of the IDB’s board of governors slated for June 22 to 26 in Jeddah.
Ahmad Mohamed Ali, president of the IDB, congratulated the laureates on their accomplishments and commended them for their valuable contribution to the development of the Islamic financial services industry.
The IDB prize selection committee, comprising eminent scholars and experts from outside and inside the bank, unanimously decided to award the prize to Usmani and Wilson during a meeting held at the IDB headquarters on April 10 in Jeddah.
The selection committee conferred the prize on Usmani “in recognition of the significant work he has undertaken for the implementation of Islamic finance.”
Usmani had also taken part in an important ruling on usury during his career as a judge in the Shari’ah Appellate Tribunal of Pakistan, in addition to manifesting a global leadership role as an Islamic jurisprudence scholar, advising and supervising Islamic financial institutions in the Islamic world, Europe and the United States.
Usmani was also chairman of the Shari’ah Standard Council at the Accounting and Auditing Organization for Islamic Financial Institutions (AAOIFI).
The statement took note of “the impact of Usmani’s writings in encouraging many to understand how to implement usury-free lives and his instrumental role in introducing Islamic finance within the curriculum of traditional religious institutions.”
The selection committee recognized the role Wilson has played in the promotion of Islamic finance and in introducing modern management teaching techniques to Islamic finance, which have provided a neutral and objective perspective.
“His sustained and continuous teaching, research, supervision and consultancy works on Islamic finance, including with the IFSB (Islamic Financial Services Board), is to be lauded,” they said.
“His immense role in mainstreaming Islamic finance and ensuring that Islamic economics, banking and finance courses and programs are taught at Western universities has resulted in offering such programs and courses at several universities in the UK and other parts of Europe.”
The prize was first launched by the IDB in 1988 to honor efforts and reward outstanding achievements in the Islamic banking and finance fields.
A total of 33 outstanding researchers and professionals have won the prize over the past 24 years.