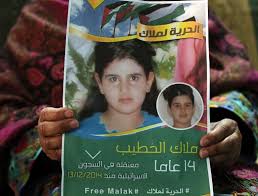 A 14-year-old schoolgirl jailed for trying to attack Israeli soldiers has become a symbol of Palestinian anger over the arrests of children in the West Bank.
The two-month sentence for Malak al-Khatib, who was accused of stone-throwing and possession of a knife, has unleashed a wave of solidarity and support among Palestinians.
“My heart broke when I saw her in court, cuffed and shackled,” her mother Khawla al-Khatib told AFP from her home in the town of Beitin near Ramallah.
“I brought in a coat for her to wear because it was cold, but the judge refused to let her have it,” the distressed 50-year-old said.
Israeli forces arrest about 1,000 children every year in the West Bank, often on charges of stone-throwing, according to rights group Defense for Children International Palestine.
But the case of Malak has brought countless media organizations flocking to her family’s door and attracted more public attention than most. The difference — she is a girl.
The Palestinian Prisoners’ Club estimates that 200 Palestinian minors are held in Israeli prisons, but only four are girls, and Malak is the youngest.
Amani Sarahna, spokeswoman for the Ramallah-based organization, said it was the first time in years that four female minors were held in Israeli jails, out of the 6,500 Palestinians incarcerated.
Following Malak’s arrest, the Palestinian leadership sent a letter to the United Nations denouncing the Israeli practice of “seizing children in the dead of night,” detaining Palestinian children “for extended periods of time” and subjecting them to “psychological and physical torture.”
A picture of Malak’s face framed in black hair, her dark eyes staring squarely into the camera, has been circulating in social media and Palestinian newspapers.
“I don’t know why a state like Israel, with the most powerful weapons at its disposal, is pursuing my 14-year-old daughter,” Malak’s father Ali al-Khatib said.
“They accused her of trying to stab a soldier. Really? A child against an armed and heavily equipped solider, a grown man?” he asked.
The father-of-eight said his daughter was arrested on her way home from school in Beitin on December 31.
According to the indictment served at a military court, Malak had “picked up a stone” to throw at cars on route 60, which is near the village and serves Israeli settlers as well as Palestinians.
The indictment, citing five Israeli officials, said Malak was in possession of a knife which she intended to use to stab security personnel in the case of her arrest. As well as the jail term she was fined $1,500.
An Israeli military spokeswoman told AFP that Malak was convicted after a plea bargain.
“Rock throwing is an extremely dangerous crime, which has maimed and killed Israeli civilians in the past,” she said.
After three weeks in custody Malak was brought before an Israeli military court and sentenced to prison.
“Every year, between 500 and 700 Palestinian children are tried before Israeli military courts,” said DCI Palestine’s Ayed Abu Qteish.
Qteish said Israeli military law allows the prosecution of children from as young as 12, which UN children’s agency UNICEF says is unique to the Jewish state.
Malak’s father thinks his daughter’s confession counts for little.
“A 14-year-old girl surrounded by Israeli soldiers will admit to anything,” he said bitterly.
“She would admit to holding a nuclear weapon if she were accused.”