Hafiz Yusuf Patel, one of the most influential Muslim leaders in Britain, has passed away (Innalillahi wa inna ilaihi rajeun). He was 92 years old.
Hafiz Patel was the leader in Britain and Europe of Tablighi Jamaat, a global Islamic missionary movement that encourages Muslims to be more religiously observant.
Huge crowds of mourners attended his funeral after Asar Salah in Dewsbury on Friday 19 February.
People have travelled from across Britain and Europe to pay their respects. The burial service will follow at Dewsbury Cemetery. Dewsbury South councillor Masood Ahmed said between 15,000 to 20,000 people have travelled to the town to pay their respects. He said, Hafiz was an instrumental figure in building the mosque to make sure there was something for the community.
A Muslim community organisation in Bradford called Mr Patel a “Pioneer of Islamic identity in Britain”.
Hafiz Patel had passed away on Thursday at the age of 92.
He had set up a seminary for Imams and Islamic scholars in Dewsbury in 1978. 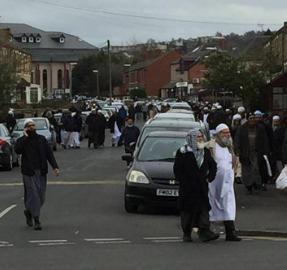 Ishtiaq Ahmed, from the Bradford Council for Mosques said, We are all very saddened and shocked by his death. He will be missed by thousands in Britain and Europe. He was a pioneer, a visionary when it comes to the Islamic identity, and the place of the Muslim community in the United Kingdom. He established Dewsbury in West Yorkshire as a centre for European Muslims in Britain as far back as 1978. He also was a strong believer in British home-grown Islam.
Every week large numbers of Muslims from around the world converge on an Islamic centre in Dewsbury. They are “Tablighis” – lay people taking time out to do missionary work.
The man responsible for attracting them to this corner of Yorkshire is Hafiz Yusuf Patel. He was invited to Dewsbury in the 1960s by local Gujarati Indian Muslims who wanted a religious guide.
Such was his influence that the popularity of the Tablighi Jamaat movement grew across the UK. Dewsbury became home to the movement’s European headquarters.
Despite Hafiz Patel’s importance, and the success of his organisation, little is known about the Tablighi Jamaat by outsiders.
The Tablighi Jamaat has done much to give Islam in Britain its conservative character and that perhaps is the most significant part of Hafiz Patel’s legacy.
BBC religious affairs correspondent Caroline Wyatt said Mr Patel was one of the most important figures in making Tablighi Jamaat (which means society for spreading faith) a global movement, particularly in spreading its work throughout Europe and the Americas.
The organisation was founded in India in 1926 and is closely linked to the Deobandi school of Sunni Islam.
Estimates for its global membership today range from 12 million to 80 million, with European members thought to number at least 150,000.