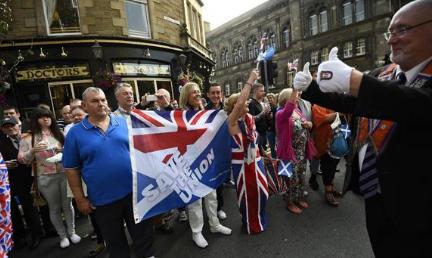 Thousands of members of the Protestant Orange order marched through Edinburgh on Saturday in a show of strength against Scottish independence, as the final weekend of campaigning for the referendum got underway with everything to play for.
Up to 15,000 supporters of retaining the United Kingdom were expected to join the march, which has sparked fears of clashes with nationalists as tensions rise ahead of Thursday’s vote.
“We are proud to be part of Great Britain. We are passionate about the union. We are here to galvanize the ‘No’ vote,” Henry Dunbar, Grand Master of the order’s Grand Lodge of Scotland, told a rally in the shadow of Edinburgh Castle.
Across Scotland campaigners from both sides were pounding the streets, after a week that saw the unionists step up their efforts following a surge in support for independence that now puts the two camps neck and neck.
Orange members from Northern Ireland and England joined the march on Saturday in a push for the union, although it has caused tensions with the official “Better Together” campaign.
A working-class, fiercely pro-union Protestant fraternal organization, the order has been accused of fueling sectarianism and marches by member in Northern Ireland through Catholic areas often descend into violence.
After a 12-year-old spectator was hit in the face with a bottle at an Orange march in Glasgow in July, opposition Labour lawmaker Jim Murphy said: “I want nothing to do with them, ‘Better Together’ wants nothing to do with them.”
Organizers of Saturday’s march called for a peaceful event, urging members to “keep your cool and your dignity” when faced with any opposition from “Yes” campaigners.
Watching the streams of Orange order pipe bands and marchers singing “God Save The Queen” through the streets of Edinburgh, “No” voter Ginger Fraser said Scots were unlikely to be swayed by the event.
“There are people from ‘Better Together’ who look embarrassed by this parade, but I don’t think it will affect the vote. People make up their own mind,” he told AFP.