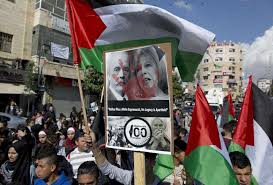 Thousands of Palestinians took to the streets of various cities on Thursday to protest on the 100th anniversary of Britain’s Balfour Declaration, which helped lead to Israel’s creation and the Israeli-Palestinian conflict.
Palestinian President Mahmoud Abbas used the occasion to denounce the declaration, writing in a newspaper opinion piece that “the creation of a homeland for one people resulted in the dispossession and continuing persecution of another.”
Several Palestinian leaders have called on Britain to apologize for the 67-word declaration that said it viewed “with favor the establishment in Palestine of a national home for the Jewish people.”
Around 4,000 people gathered in the West Bank city of Nablus, where effigies supposed to represent British Prime Minister Theresa May and former British leader Arthur Balfour were set ablaze.
A few thousand more gathered in Gaza and hundreds in Ramallah. Smaller rallies were held in the southern West Bank city of Hebron, where protesters burned a British flag.
Several dozen Palestinians also protested outside the British consulate in Jerusalem.
In Nablus, marchers chanted “Oh the English colonizers, we want an apology from you.”
In Ramallah, signs called Balfour “the promise of he who doesn’t own to those who don’t deserve” — a common expression in Arabic for the Balfour Declaration.
Some protesters held black flags calling for Palestinian refugees to be allowed the right to return, as they marched from Ramallah’s Arafat Square to a nearby British cultural office.
“Balfour promised to establish the Israeli entity and its result is everything the Palestinian people still suffer from today, such as displacement, destruction and pain,” said Abu Haitham Amro, 70, who was carrying a Palestinian flag.
In Gaza, more than 3,000 people took part in a march from a square in Gaza City to the local UN headquarters.
The Balfour Declaration is celebrated among Israelis, who see it as a major step toward the founding of their state in 1948 at a time when Jews were facing persecution elsewhere.
But the war surrounding Israel’s creation also led to some 750,000 Palestinians either fleeing or being expelled from their homes — what they call the “Nakba,” or catastrophe.
Senior Palestinian official Mahmoud Al-Alul said in Ramallah the British government should apologize.
“It is unprecedented for criminals to celebrate their crime. That the British prime minister insists on celebrating this means they persist in the oppression of the Palestinian people.”
In 1967, Israel occupied the West Bank, including east Jerusalem, and the Gaza Strip in the Six-Day War. It has since annexed east Jerusalem and the occupation of the West Bank continues.
Hopes for a two-state solution to the Israeli-Palestinian conflict are greatly diminishing.
“The Palestinians say that the Balfour Declaration was a tragedy. It wasn’t a tragedy,” Israeli Prime Minister Benjamin Netanyahu said on Wednesday before departing for London, where he is marking the anniversary.
“What’s been tragic is their refusal to accept this 100 years later. I hope they change their mind, because if they do they can move forward finally to making peace between our two peoples.”
Abbas wrote in Britain’s Guardian newspaper: “We have endorsed the two-state solution for the past 30 years, a solution that becomes increasingly impossible with every passing day.
“As long as the state of Israel continues to be celebrated and rewarded, rather than held accountable to universal standards for its continued violations of international law, it will have no incentive to end the occupation,” he added, referring in particular to Israeli settlement building.