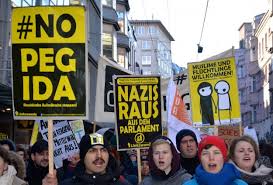 Nearly two thousand people protested on Saturday in the German city of Frankfurt against a march held by the far-right movement Patriotic Europeans Against the Islamization of the West, also known as PEGIDA.
Approximately 200 PEGIDA members gathered in Frankfurt’s Rossmarkt Street and chanted against Islam and migrant communities.
Simultaneously, two thousand protesters held demonstrations in different parts of the city against the group.
German police took measures to prevent the two groups from clashing during the marches.
PEGIDA opponents chanted, “Migrants will be welcomed in Frankfurt” and “Nazis out of Frankfurt”.
Some political parties and leftist groups also supported the protest.
Despite heavy security, with nearly one thousand police officers on duty, the opposition group threw eggs and tomatoes to the police who put up a barricade between them and the far-right demonstrators.
Some protesters and police officers sustained injuries during the protest, and police detained several people.
Germany, home to millions of Muslim immigrants, is experiencing debates about multiculturalism. Although the country’s leaders are calling for raising the level of integration for migrant families, opponent movements are taking place.
PEGIDA was established in Germany in 2014, holding since then many protests in Germany and other EU countries.
After organizing thousands-strong marches, its appeal has since tapered off.