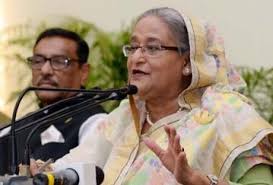 Prime Minister Sheikh Hasina today described her recent three-nation visits as very important, saying it brightened further Bangladesh’s image in international arena.
“My visits to Saudi Arabia, the United Kingdom and Australia took place within a short time and all of them are very important . . . it’s my firm belief that Bangladesh’s image has been brightened further in the international forum through it,” she told a crowded press conference at Ganabhaban here this afternoon.
The premier said the first leg of the tri-nation tour took her to Saudi Arabia’s Dammam on April 15 at Saudi King Salman bin Abdulaziz Al Saud’s invitation to the concluding ceremony of a joint grand military exercise named “Gulf Shield-1”.
“I also exchanged greetings with the Saudi King and other heads of state and government,” she said.
Sheikh Hasina said her six-day UK visit to join the Commonwealth Heads of Government Meeting (CHOGM) 2018 was of high importance from the perspective of member countries and particularly Britain against the backdrop of BREXIT.
The CHOGM-2018, she said, gave importance on four issues — a fairer future; a more sustainable future; a more prosperous future and a more secure future while the agenda involved issues like democracy, human rights and rule of law.
The premier said in various sessions of the 53-nation Commonwealth’s summit she campaigned for technology transfer to combat climate change phenomenon alongside supports highlighting the priority issues of adaptation, financing and tolerance and capacity development.
Sheikh Hasina said she also tried to draw attention particularly of leaders of the developed nations to the liability of climate change, fair compensation for the affected countries and the migration to be triggered by the adverse impact of the phenomenon.
The premier said in the executive session of the summit, she proposed reorientation and reorganisation of various Commonwealth bodies to effectively meet constantly evolving needs and expectations of the member states alongside Commonwealth Secretariat’s reform to achieve the goals identified in the CHOGM-2018.
Sheikh Hasina said she told the summit that Bangladesh was determined to be transformed as a “blue champion” by implementing Commonwealth Blue Charter adopted at the CHOGM-2018.
The prime minister said, the Rohingya crisis drew an extra attention in the summit this year while the summit leader’s statement saw inclusion of two paragraphs on the issue.
She said, the summit called for a halt to all violence, restoration of normality and accountability of the perpetrators for gross violations of human rights in Myanmar’s northern Rakhaine state through an independent investigation.
The heads of the government in the summit, she said, also stressed actions to address the root causes of the current crisis and immediate implementation of the Koffi Annan Commission recommendations.
The premier described the Commonwealth response to the issue as a success of her government’s diplomacy in the international arena.
On the sidelines of the CHOGM, the prime minister said, she also held bilateral meeting with her Indian counterpart Narendra Modi and exchanged views with a number of heads of the government including her British and Canadian counterparts.
She said the leaders during these sideline meetings as well highly praised Bangladesh’s role in facing the Rohingya crisis with patience and assured her of extending strong support to this end.
Sheikh Hasina said Australian Premier Malcom Turnbull’s invitation took her there to join the Global Summit of Women 2018 when she was conferred with the prestigious Global Women’s Leadership Award-2018 for her leadership in expansion of women education and creating women entrepreneurship in Bangladesh and Asia-Pacific region.
She said US-based Global Summit of Women President Irene Natividad handed her over the award in the presence of nearly 1000 global women leaders when Natividad appreciated her also for her success in expanding digital technology and sheltering the persecuted Rohingyas in Bangladesh.
Natividad, the premier said, also mentioned that Bangladesh set up a unique example of humanitarian leadership by sheltering 11 lakh forcibly displaced Rohingya people which the global leaders could follow.
Sheikh Hasina said at the function she called for mobilising a new global alliance to promote women rights and empowerment dedicating her award to the entire womenfolk of the world while placing a four-point proposal for realizing their rights throughout the globe.
The prime minister said she held a meeting with Australian counterpart Malcom Turnbull at his residence on Saturday, visited Western Sydney University and joined a community event at Sofitel Hotel in Sydney.
The premier said her Australian counterpart Malcom Turnbull also high appreciated Bangladesh’s role in sheltering the Rohingyas saying it brightened the country’s image abroad as she held a bilateral meeting with him at his residence.
The prime minister said the common stance of the two countries has deepened the bilateral relations and her visit to Australia has taken this ties to a new height.
Finance Minister AMA Muhith, Road Transport and Bridges Minister Obaidul Quader, Foreign Minister Abul Hassan Mahmud Ali, Information Minister Hasanul Huq Inu and State Minister for Foreign Affairs Md Shahriar Alam were present on the dais.
Besides, Agriculture Minister Begum Matia Chowdhury, PM’s Advisers HT Imam and Iqbal Sobhan Chowdhury, State Minister for Information Tarana Halim and senior leaders of Bangladesh Awami League and editors and senior journalists were present, while PM’s Press Secretary Ihsanul Karim moderated the ceremony.