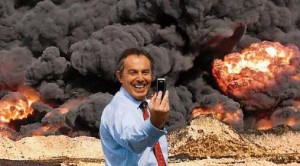 Positioning himself to take the right “selfie,” former British Prime Minister Tony Blair is seen grinning as he tilts his phone to make sure a background of smoke and fire appears in the shot.
Or at least that’s how one artist wants to portray Blair, the man who led Britain to the 2003 Iraq war.
The image features in an art exhibition which has launched this week at the Imperial War Museum North in the UK’s Manchester and will run until February 2014.
The museum has a collection of 70 works that forms “Catalyst: Contemporary Art and War.”
All 70 works, which include installations, photography, film, sculpture, oil paintings, prints and book works, present a collection of contemporary art produced since the First Gulf War.
“At its center is the kennardphillipps’ take on the decision to invade Iraq ten years ago, with a happy Tony Blair cut in front of a shocking battle scene of smoke and flames in Iraq,” reported Britain’s Daily Mail on Wednesday.
Kennardphillipps is a collaboration working since 2002 to produce art in response to the invasion of Iraq.
Another piece by Turner Prize-winning Brit Steve McQueen features a series of “postage stamp” sheets with photographic portraits of those who died in the Iraq war, with each one also bearing the standard profile of the Queen Elizabeth.
Meanwhile, Gaza-Born Taysir Batniji’s tongue-in-cheek art series features estate agent details for destroyed homes in Gaza; a sarcastic comment on the situation in Palestine.