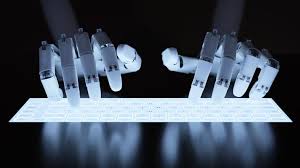 Artificial Intelligence (AI)
Artificial Intelligence and machine learning is seen as one of the biggest trends in 2018. Artificial intelligence will play a role in how businesses evolve since they’re able to know more about their customers and how to communicate with them. Businesses can let AI do the thinking tasks for them and save time and effort for humans.
You might think that robots will start taking over humans’ jobs but actually, optimists say humans will be led to create new jobs that don’t exist today. The potential of AI is immense.
One form of AI is chatbots that are software programs that use messaging to do tasks. This includes native bots like Siri for instance but also third-party bots that many global companies are using. They’re becoming more intelligent in in conversations with humans and helping businesses engage with their customer. Chat bots are also gaining momentum in mobile technology. Similarly, voice assistants are going to continue to develop and be more commonly used.
Blockchain
Most industry experts say blockchain will be big in 2018. It’s another digital disruption where money exchange is digitized. Blockchain has been on the rise lately but still vague to many people. It could make accountants’ jobs easier and more organized. To put it simply, it categorizes a list of records that are linked and no longer accessible but rather secured using cryptography.
It means relying on a smart system to achieve an exchange like leasing an apartment without relying on a middle party such as banks.
The future of this technology could mean replacing banks and law firms. To blockchain advocates, it’s more secure since it records the entire history of a transaction and makes sure it’s never erased. If any changes are done, all parties in a network need to approve. This is useful in deals, contracts, and preventing fraudulent ones.
IoT
Around $6 trillion will be spent on IoT solutions in the next 5 years, according to Business Insider intelligence. Organizations in the Middle East spent around 8 billion dollars in IoT technologies in 2017, according to SAP.
29% of companies in the Middle East are adopting IoT compared to 12% in the past five years, according to a report by Vodaphone. More and more devices are connected to the web soon we’ll be having over a 100 billion devices and later a trillion. Technology will be an essential extension of humans’ lives. There’s been an increase in sectors adopting IoT such as consumer electronics, automotive industry, manufacturing, transportation, healthcare, retail, and energy. Although the least quick to adopt is the public sector, it has also gone on board.
VR and AR
The lines between the physical and virtual environments are becoming more and more blurred thanks to transformative technologies such as virtual reality and augmented reality. As the software and hardware improves and becomes more commercial, more developers can develop AR applications. Like VR, it’s used in various industries not just entertainment and games. Apple ARkit, Google AR core, and Windows Mixed Reality are pioneering in this domain creating more accurate and advanced applications. Retailers offer apps that let buyers preview virtual versions of products such as furniture, clothing and fashion accessories in real-world settings, transforming the way people shop.
Towards the “Mega-cloud”
Mega cloud is where multiple private and public clouds are in one holistic system. This will allow for an intelligent view of the entire IT environment. Dell Technologies predicts an opportunity for innovations to develop in cloud computing, storage, networking, orchestration, and maybe even automation.
Cybersecurity
With digital transformation comes higher risks of cyber attacks, according to A10 predictions. It’s no surprise that next year the public sector is at a greater risk of cyber attacks because governments are moving to online services and on to smarter infrastructures like the cloud. Most will resort to best effort and underfunded security programs. This causes governments to become at a higher risk in becoming targets. These attacks will also have a ripple effect, increasing the chances of exposing citizens to more fraud and theft or exposure of personal data. New technologies will emerge that will give security researchers and security operations the ability to predict an attack. Predictive analytics will become more necessary, and corporations will have to invest these technologies to stay ahead of threat actors and protect their systems.